Lexus Keeps an Eye Toward Future with LS+Concept 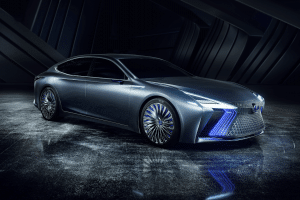 The Lexus LS+Concept made its debut at the Tokyo Motor Show featuring a look at what the 2020 version of the flagship may look like.

When Lexus unveiled the fifth-generation of its LS flagship sedan, the company said it would continue to refine and update it and it’s made good on that promise with the LS+Concept.

Debuted at the Tokyo Motor Show, the new concept showcases the Japanese brand’s autonomous driving technology. One of self-driving features is Highway Teammate, which can drive on the freeway from entrance ramp to exit ramp in fully autonomous mode without any input from the driver.

The concept is certainly the next step up in autonomous driving from the LS 500h arriving in dealers early next year. The new flagship enjoys a variety of self-driving capabilities already with automated merging, lane-keeping assist and lane changing.

The LS+Concept uses artificial intelligence to make the sedan even more functional in autonomous mode. Additionally, software updates can help AI that learn from big data, including information on roads and surrounding areas, ensures a high level of automated driving.

The car, which can grow along with its users, represents a new age for the image of cars to which people can become emotionally attached. Much of this is designed for the 2020 version of the LS, according to officials.

The evolution of the flagship’s autonomous capability is moving from just simple on-highway ability to much more. The company wants to contribute to the “achievement of a world free of traffic casualties,” and has been actively introducing advanced technologies based on its Integrated Safety Management Concept.

(Click Here to see what Lexus has in store for SEMA.)

On the exterior, the concept keeps true to the push for more expressive designs. The LS+Concept indicates the direction of next-generation Lexus design based on Lexus’ L-finesse design philosophy.

In addition to an even more bold Spindle Grille than on the current model, with a large grille shutter that contributes to both improved cooling and enhanced aerodynamic performance, distinctive Lexus foresight is expressed in the LS+ Concept through, among others, partly laser-lit headlamps and rear combination lamps, as well as through electronic side mirrors.