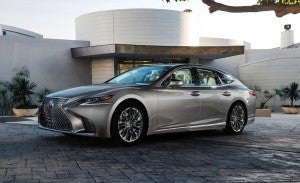 The 2018 Lexus LS 500 features bold new exterior styling, which has been the focus of the company’s higher ups.

Throughout the years, Lexus has built a reputation for reliability that has always inspired confidence if not loyalty among the increasingly fickle, affluent buyers, who use their car both for transportation and to make a statement about their status and accomplishments.

With the new latest versions of the LS, the LS 500 and LS 500h, Lexus is also serving notice that it prepared not only to move away from the boring styling that has characterized the brand’s vehicles in the recent years but also plans to give customers a genuine choice of powertrain technology by offering a hybrid right alongside gasoline version.

Moreover, the 2018 LS 500h and heir to LS 600, which was one of the more compelling Lexus vehicles to debut in recent years, isn’t some afterthought but a well-planned and -equipped vehicle featuring a refined powertrain with a range of 600 miles, which is more than enough for most any weekend trip.

However, Lexus and its parent Toyota also have been true to its philosophy of continuous improvement by tinkering with the parallel hybrid system so that it’s responsive when you put down the accelerator. There is even an exhaust note.

(Lexus LS: Struggling for relevance in a changing marketplace. For the story, Click Here.) 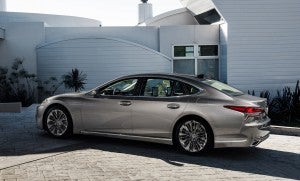 The new LS faces steep competition — from the growing luxury SUV market in the U.S.

Rather than the 10-speed transmission found in the gasoline version of the LS, the LS 500h comes with electronically controlled planetary gears continuously variable transmission shift smoothly and quite efficiently during a drive on the two-lane roads north of San Francisco.

The 2018 LS 500h hybrid system includes a 3.5-liter six-cylinder engine and two electric motors as well as generators and a lithium-ion battery. I suspect the 354 horsepower produced by hybrid system will satisfy everyone and the top speed of 136 miles per hour under controlled conditions and while we didn’t have a stopwatch handy, Lexus said the LS 500h will go from zero to 60 in 5.1 seconds.

Read our review of the best Lexus Extended Warranty options

In addition, even though the LS 500h has a long, 123-inch wheelbase and is packaged as “Premium Luxury Sedan,” the fuel economy of 25 miles per gallon in the city and 33 on the highway for a combined number of 28, while good for the category, seem disappointing given Toyota’s success in getting better fuel-economy numbers in other hybrid models. The fuel economy number for the all-wheel-drive version is 23 mpg in the city, 31 mpg on the highway and 26 mpg combined.

The long wheelbase and a completely redesigned suspension system and rear-wheel-drive layout give the car a comfortable ride. In addition, the steering, I found, is accurate and car handles nicely on winding roads and in tight quarters.

The Lexus LS500 comes to market with a fresh, contemporary styling that elevates the curb appeal. It is longer, wider and lower – less than five-feet tall giving it a low-slung appearance – that is reinforced by the lines of the sheet metal and sculpted lines that from the front to the rear. 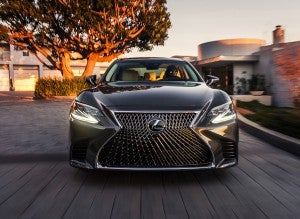 The nose of the new LS 500 emphasizes the new look exterior for the Lexus line-up.

Lexus front fascias have triggered debate for some time now but the detailing on front lights and grille and the rear are well done and complete the cars contemporary look. Lexus hasn’t released pricing information have said but even the hybrid version is expected to come somewhere above $80,000.

Lexus’ designers also have gotten the memo that the war for the hearts of affluent buyers is not only waged under the hood but is also fought in the car’s interior and instead of following their German competitors they have gone with touches that use traditional Japanese craftsmanship.

The result is a creative, distinctive environment, particularly in the “Executive” version LS 500h, which features Kiriko Glass ornamentation and available hand-folded, origami-like pleats on the inner door that are actually done by hand. The wood-trim and other materials only add to the cocoon-like comfort of the interior, which extends into the rear seat where the executive package includes a reclining seat with a foot race.

The other key touch points in the cars such as the steering wheel and driver’s seat were also quite friendly.

LS 500’s cabin also includes technology such as the next-generation Remote Touch Interface, a 12.3-inch wide navigation display and an optional 24-inch color head-up display – currently the largest in the world – that projects a variety of information, including navigation prompts, onto the driver’s forward view. 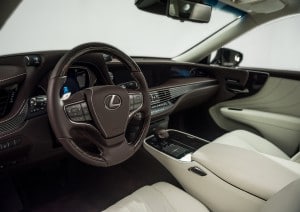 While the outside gets a new look, the LS interior continues to enjoy all of the requisite materials for a luxury sedan: leather and wood.

The safety features on the LS 500h, which includes a stiff frame from the new platform that protects passengers, includes technology for avoiding accidents related to pedestrians, vehicle departures from roads, intersections, and rear-end collisions with automatic braking. Moreover, while we didn’t get to put them to a test, the features that did come into play were helpful without being particularly intrusive or distracting.

Lexus caught the automotive world by surprise when it introduced the first version of its LS flagship nearly 30 years ago. But by offering an LS 500 with an alternative power train at a competitive price, Lexus could steal a march on competitors, who are still trying to work out a powertrain strategy.