“Aromas that any petrolhead will instantly recognize.” 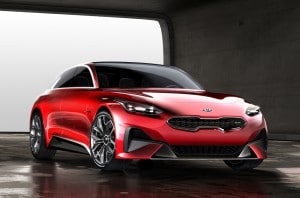 Kia's Proceed concept could re-ignite a fervor for station wagons — if it comes to the United States.

Kia is Proceed-ing with plans to get big into the station wagon segment — whoops, make that “extended hatch” segment with the debut of the new Proceed model at the Frankfurt Motor Show.

Whether you prefer that term, or some other euphemism, like “shooting brake,” “carryall,” “depot car,” or even “estate car,” the new model has been generating plenty of buzz since the Korean carmaker released the first teaser images of the Proceed last week.

As with the new Stinger, the Kia Proceed is the sort of vehicle that will further enhance the reputation for cutting-edge styling that has been achieved under the guidance of Peter Schreyer, the one-time Audi styling chief, who has worked magic for a brand one known for bland and forgettable econoboxes.

Gregory Guillaume, who has taken the design lead since Schreyer was bumped up to Vice Chairman for parent Hyunda-Kia, said his goal for the Proceed was to come up with a “bold and engaging vision for a potential member of the next generation cee’d family. The Proceed Concept is an extended hot hatch that encapsulates Kia’s performance spirit. It’s an ambassador of all our emotion, our passions and our dynamic values.” 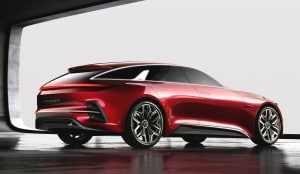 Kia officials won't call it a wagon, but instead describe the Proceed concept as an "extended hatch."

Officially a concept, Kia still isn’t saying exactly what it has in mind for the Proceed, whether it will replace or supplement a line of hatchbacks it has offered in Europe under names like the Cee’d and Procee’d.

“The extended hot hatch you see here could be an alternative for us,” hinted Guillaume. “It’s a third body type … reworked and reimagined to combine a striking new visual presence with a dash of real-world versatility. The Proceed Concept is our vision of how the vibrant spirit of the pro_cee’d could be reincarnated and revitalised for a new generation of drivers.”

The long hood of the compact five-door wagon gives the show car an almost rear-drive stance, enhanced by the steep rake of the windshield, the coupe-like flow of the roofline and the steep rear hatch.

The familiar Kia tiger-nose grille is more subdued than on the Stinger, but the overall appearance of the face is distinctively sporty, with what appears to be carbon fiber framing large air scoops on either side of the front fascia, and Lava Red wing-like strakes below the bumper. Slit-like LED headlamps and daytime running lights are accompanied by what the Korean carmaker describes as a “Luminline.”

That, it explains, is “an illuminated outline of the car’s glasshouse that greets drivers as they approach the car. This serves as a powerful nocturnal visual identifier for the Proceed Concept, highlighting its fastback shape.” 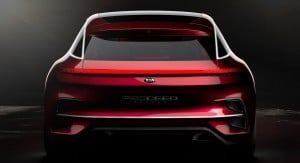 From the side, one immediately spots the 20-inch wheels, bookending rising chromed accent lines and what again appears to be carbon fiber for the Proceed Concept’s sills and rockers. A closer look also reveals hidden, pop-out door handles, as well as the lack of B-pillars. The two advanced images Kia has released fail to show much of the back end, though it appears the back fascia takes on some sharp creases as it flows off the rear fenders. There also appear to be some more carbon fiber accents below the LED taillamps.

The interior, according to Guillaume, was inspired by haute couture, or high fashion, “enriched with materials used in innovative and unconventional ways – methods that might be familiar to fashion houses, but not in the automotive arena.”

The four interlinked seats, for example, are wrapped in more than 100 yards of black elastane fabric, a spandex-like material known for its looks, as well as its elasticity and durability. It stands in sharp contrast to the brightwork on the instrument panel. The overall interior is finished in the same Lava Red as the exterior, while door linings feature hand-painted fabric.

The controls have the machined appearance of high-end audio gear, meanwhile, and a carbon fiber spine running the length of the cabin supports the center console. 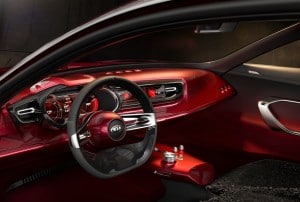 The interior is finished in the same Lava Red as the exterior, while door linings feature hand-painted fabric.

One of the more unusual features, dubbed the “Memory Bank,” can be found on a flush-mounted shelf within the dashboard. It contains three flacons each creating a distinct aroma.

“Each of these three engraved flacons contains a scent synonymous with power, passion and performance; aromas that any petrolhead will instantly recognise,” describes Guillaume. “There’s the warm musky smell of aged leather, the oily fragrance of a garage that’s home to a classic car, and the tang of high-octane motorsport fuel. This is about automotive passion and the love of car culture.”

As for powertrains, there are likely to be a variety of alternatives, depending on market, starting with a turbocharged, 1.0-liter three-cylinder gas engine. A diesel would be a certainty for Europe, as well.

How close is the Kia Proceed Concept to production? We’d expect to see little if any carbon fiber in a production model, considering the cost of that still-exotic material. And the oversized wheels would likely shrink down by a few inches. But the overall look seems certain to carry over into a street model.

What about the U.S.? That’s one of the big questions we’ll be asking next week about the Proceed, which was designed at Kia’s Frankfurt design studio. Until now, the old Procee’d didn’t make the jump to the States, but considering the striking looks of this show car it would be a disappointment if Kia didn’t find a way to make it across the Atlantic this time. It just might be the car to bring back the station wagon – or whatever you prefer to call it.