Quality up overall, but Power warns of some “early warning bells.” 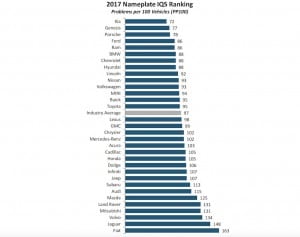 For the second year in a row, Kia nabbed the top spot in the closely watched J.D. Power Initial Quality Study, with all three of the South Korean carmakers sold in the U.S. market landing in the Top 10.

Detroit automakers also fared well in the study, with four brands in the Top 10. But the Japanese, long credited with driving up the quality of vehicles sold in the U.S., didn’t fare nearly as well, with only Nissan landing in the upper reaches.

Perhaps the biggest surprise of the 2017 Initial Quality Study was the poor showing by Japanese giant Toyota. Along with its Lexus brand it ranked number one more often than any other manufacturer – for 14 of the 31 years the IQS has been released to the public. But this year, Toyota was 14th, and only barely above industry average. The Lexus brand fell below average for the first time since it was launched.

The strong showing of the South Koreans will likely take consumers by surprise, said Dave Sargent, Power’s vice president of automotive research. Their collective reputation has continued to lag what’s actually happening with the three brands – which includes not only Kia but sibling Hyundai and newly launched luxury brand Genesis.

Nonetheless, Kia’s victory “wasn’t a fluke,” Sargent told TheDetroitBureau.com, adding, “They instill customer requirements … more religiously than anyone else and stick to that through product development.”

The auto industry, as a whole, had a good year, and that was no mean feat considering quality levels reached record levels, according to the IQS, in 2016. The overall score for 2017, however, saw a roughly 8% reduction in “problems” reported by owners. 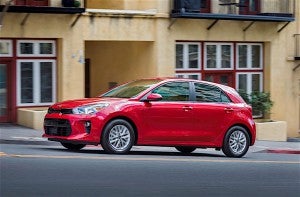 Kia topped the current J.D. Power Initial Quality Study. It was joined in the top 10 by Hyundai and Genesis.

Power asks consumers to rate their vehicles across a variety of areas, ultimately looking for both mechanical and design issues. It calculates the results in terms of “problems per 100 vehicles,” or “PP100.” This year, the industry average fell to just 97, down from 105 PP100 in 2016.

(Tesla back in the good graces of Consumer Reports. To find out how, Click Here.)

Traditional mechanical problems – everything from wind noise to faulty transmissions – have largely become a thing of the past. The real challenge for the industry has been addressing issues with high-tech hardware and software.

One of the trouble spots revealed by the 2017 IQS covers the increasing array of semi-autonomous features like blind spot detection, collision avoidance and active cruise control. With the industry racing to bring fully autonomous vehicles to market by early in the coming decade, the research firm warned that these should be taken as “early warning bells” the industry has to address and address quickly.

On the other hand, manufacturers have been resolving many of the problems customers face with so-called ACEN, or audio, communication, entertainment and navigation, systems. Nowhere was that more obvious than with Ford.

The Detroit maker had been the highest-ranked of the U.S. brands prior to the introduction of its Sync infotainment system, but its numbers collapsed as owners reported an array of issues with the technology. This year, however, Ford landed in fourth on the IQS, Sargent primarily crediting the completely reworked Sync3 system for overcoming earlier problems.

While the Korean automakers were clearly in the lead, according to the IQS result, domestic Detroit automakers had a mixed showing. Ford, Chevrolet, Lincoln and Ram all landed in the Top 10 (actually, the Top 11 due to a tie). But Ram’s siblings among Fiat Chrysler brands didn’t fare nearly as well, all the rest landing below average. The Fiat brand was dead last, with 163 PP100.

Overall, Kia had a score of just 72, meaning only about seven in 10 owners reported even the most minor problems this year. Genesis, the recently launched luxury spin-off from Hyundai, had a score of 77. Porsche, which has won the IQS more often than other brand but Lexus came in at 78.

Toyota, at 95 PP100, barely topped the industry average of 97 problems per 100, while Lexus had a score of 98. Among the Japanese, only Nissan was in the top 10, at 93. More notably, Nissan and Toyota were the only brands from Japan above industry average.

The Japanese, in general, are experiencing the same sort of high-tech headaches that crippled Ford and, before it BMW – which pioneered the infotainment world with its iDrive system.

The Japanese “have been slow to address this issue,” and as they have added new, and more advanced systems, Sargent explained, consumers have been complaining about balky technology that can often be difficult and confusing to operate.

The Initial Quality Study looks at vehicles during their first 90 days of ownership. (Another Power study examines longer-term reliability.) The latest IQS was based on responses from 80,000 owners who purchased their vehicles between February and May of this year.