Compact ute to pair up with bigger F-Pace. 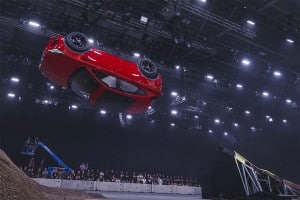 Jaguar is hoping that buyers will also flip for its new E-Pace SUV. The stunt earned a spot in the Guinness Book of World Records.

Jaguar is hoping buyers will flip for the company’s new SUV, so it decided to have the E-Pace turn head-over-heels during a splashy London debut today. What’s clear is that the 50-foot jump, complete with a 270-degree barrel roll has earned Jaguar’s second SUV a Guinness World Record.

The E-Pace makes its appearance barely two years after the debut of the F-Pace, the larger utility vehicle now Jaguar’s best-selling offering – and together they reflect the dramatic shift in the global automotive market. In the U.S., in particular, utility models now account for more than 40% of overall vehicle sales, and they’re rapidly gaining traction in the luxury segment.

The five-seat compact SUV is based on a shortened version of the Lightweight Aluminum Architecture used for the F-Pace, as well as the 2016 Jaguar XF and the XE compact luxury sedan. The British maker has already revealed that it will reach showrooms early next year at a base price of $38,600 plus $995 delivery charges.

The E-Pace measures 173 inches, nose-to-tail, with a wheelbase of 105.6 inches, the latter dimension almost eight inches shorter than the original F-Pace. The new Jaguar ute has a 78.1-inch width and stands 64.9-inches high.

Visually, it shares many of the key design cues of the F-Pace – as well as Jaguar sport models such as the XF – including the large cross-hatch grille and “jewel-like” headlamps that flow into the front fenders. 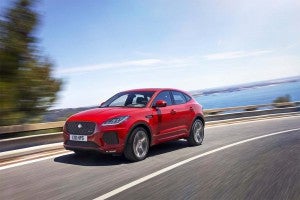 The new E-Pace follows on the success of Jaguar’s first-ever SUV, the F-Pace, which is slightly larger.

(Jaguar set to reveal second SUV. To see what it teased about the E-Pace then, Click Here.)

“Established Jaguar design principles ensure the E-Pace is immediately recognizable as the sports car of its class,” said the maker’s design chief Ian Callum. “Our new compact SUV combines the interior space, connectivity and security that families expect with the kind of proportions, purity of design and performance not usually associated with such a practical vehicle.”

Initially, at least, two powertrain packages are going to be offered:

Both models are paired to the familiar 9-speed ZF automatic found in so many other Jaguar products.

The lightweight aluminum architecture used for the Jaguar E-Pace should translate into both better performance and improved fuel economy compared to many other, similarly sized SUVs.

As with the bigger ute, E-Pace will retain a double-wishbone front suspension and an Integral Link rear, pretty much state of the art among today’s utility vehicles, which have moved away from classic SUV design to put more emphasis on road manners than off-road capabilities. 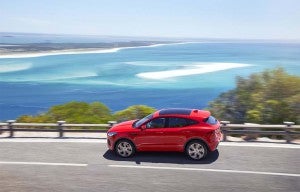 There also will be an electric power-assist steering that is speed sensitive and uses a variable pitch gear set intended to make it more responsive the more the driver turns the wheel.

Jaguar also plans to offer its latest array of digital safety and connectivity features on the E-Pace.

Expect to see the new model roll the new E-Pace into U.S. showrooms early next year. It will be joined later in 2018 by the all-electric I-Pace. That model will use an entirely unique platform – with its batteries mounted in the skateboard-like platform – meant to deliver an extremely roomy interior despite a compact footprint.

The stunt “has always been an ambition of mine,” Grant said, “ever since I was a boy.”