Project 8: “Most Extreme Performance Jaguar Ever” 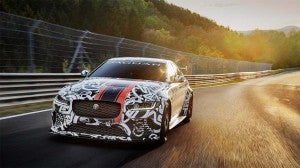 Jaguar is working up what it promises will be the brand’s “most powerful, agile and extreme performance vehicle ever.” It will also be one of the most exclusive, the British maker planning to roll out just 300 copies of the Jaguar XE SV Project 8.

The 591 horsepower sedan is a product of the Jaguar Land Rover Special Vehicle Operations unit that has been turning out a variety of other limited-edition models from the new technical center it opened in the U.K. last year. Earlier projects included the Range Rover Sport SVR, as well as the Jaguar F-Type Project7.

“Our clients worldwide were thrilled by the F-TYPE Project 7,” said John Edwards, Managing Director of Jaguar Land Rover Special Operations. “The time is right for SVO to produce the most extreme performance road car in the history of Jaguar,” he continued, adding that, “The new XE SV Project 8 takes aerodynamics and performance engineering to another level.”

(Jaguar adding new wagon – er, SportBrake – to its line-up. Click Here to check it out.)

These images show a thinly disguised version of the Project 8 sedan – wearing camouflage designed by SVO, of course – testing on the Nürburgring Nordschleife. 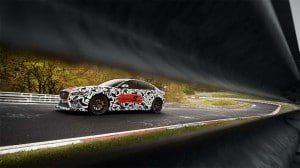 Jaguar hasn’t released any numbers from the track, so we don’t know how its time compares to other specialty models. What we do know is that the automaker is targeting output of 600PS, or 591 horsepower from a specially tuned 5.0-liter supercharged V-8.

That’s a sizable bump from the current Jaguar XE which makes as much as 340 horsepower in production trim. The Project 8 sedan will also blow past the old Jaguar XJ220 supercar – of which 271 were produced between 1992 and 1994. Of course, its 369 horsepower was motivating a two-seat coupe weighing only 3,200 pounds. 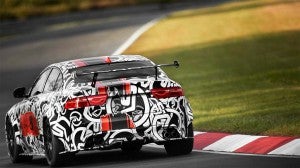 All 300 Project 8 sedans will be hand-built at SVO's tech center in Coventry.

Jaguar isn’t putting a price tag on the new XE SV Project 8, but something nudging into six-figure territory wouldn’t be a surprise, especially as the British subsidiary of India’s Tata Motors says it will hand-build “no more than 300 cars” at the SVO Technical Center in Coventry.

“The price for such an extreme performance sports car available in strictly limited numbers will reflect that,” said Edwards.

Jaguar does note that will target worldwide markets, though it does not say if that includes the U.S. – often off-limits to specialty projects because of the cost and hassle of homologating vehicles to meet American emissions and crash mandates.

We’re expecting to get a better look at the Jaguar XE SV Project 8 just before its formal public debut at the annual Goodwood Festival of Speed on June 30.