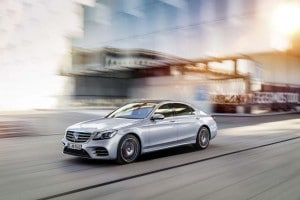 The Mercedes S-Class gets its first update since the latest model was revealed in 2013.

What do you do when you dominate the competition? In the case of the Mercedes-Benz S-Class, the answer is to keep things fresh. And that means an update of the big sedan is making its debut this week at the Shanghai Motor Show.

At first glance, there are no big surprises, the exterior and interior updates modest, at most. As with the current version of the Teutonic sedan, the emphasis is on technology, with the 2018 Mercedes S-Class introducing the latest suite Intelligent Drive and advanced driver assistance systems.

“The development of the new S-Class was extremely extensive. With a whole series of new features and functions, the S-Class remains a technological pioneer,” said Ola Källenius, the head of R&D for the Mercedes brand, ahead of the S-Class debut in Shanghai. 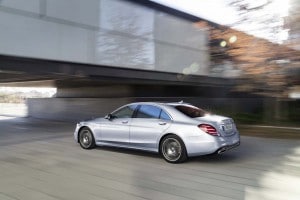 The current S-Class was a technical tour de force when it debuted just three years ago, introducing a range of features, including the ability to drive hands-free, albeit for only short stretches of time. The new S-Class takes things a step further with a long list of new features that include: 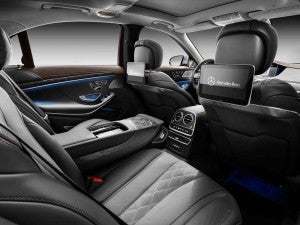 Like a business jet, the rear seats of the Maybach S560 can recline up to 43 degrees.

The full range of new S-Class models are on display in Shanghai, from the Mercedes-Benz S450 to the Mercedes-AMG S65, as well as the big Mercedes-Maybach S650.

Visual changes start with a revised front fascia and bumper and updated LED headlights. In the rear, there are new LED taillights and an updated bumper.  The S-Class line also offers two new 20-inch wheel choices.

Inside, there are three new upholstery options, a new, three-spoke steering wheel and the large COMAND infotainment system gets not only a software update but a new, single-piece glass display. There’s also a new, wireless phone charging system added to the center console.

The new Energizing Comfort system links together an assortment of features, such as the automatic climate control, the fragrance dispenser, LED backlighting and even musical ambience. 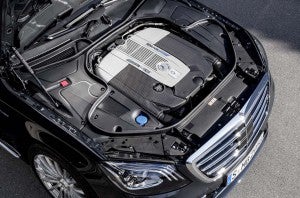 As for the Mercedes-Maybach S560, it shares the same, new 4.0-liter engine as Mercedes-Benz S560. The Maybach wheelbase still measures 7.9 inches longer, with an interior package modeled after a business jet, with back seats that recline up to 43 degrees.

Mercedes says pricing for U.S. S-Class models will be released closer to the on-sale date late this year.

(Mercedes robo-cab set to debut in 2021. Click Here for the story.)