Best in Show: 10 to Check Out at the New York Auto Show

Power, speed, green and even something for your dog! 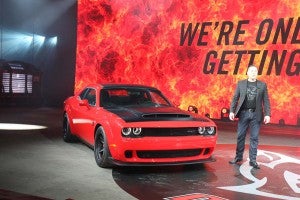 The Dodge Demon is tough to ignore in what should be called arrest-me red and an 840-horsepower engine.

For automotive fans and industry insiders alike, the New York International Auto Show is one of the biggest and most important annual events – and it won’t disappoint this year, as dozens of new vehicles are making their debut at the Big Apple’s Jacob Javits Convention Center this week.

They underscore the dramatic changes sweeping through the auto industry and offer something for everybody, whether you want an environmentally friendly crossover, a muscle car or a sedan that will let you drive hands-free. There were also some exciting concepts that promise to translate into cool production cars in the not-too-distant future.

Here’s a look at 10 of the hottest, most intriguing, most unusual and most desirable models to debut at the 2017 NYIAS:

This story also appeared on NBCnews.com.