XF Sportbrake due in American showrooms for the first time. 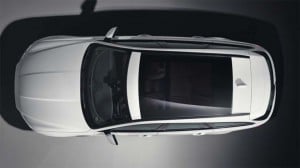 An aerial view of the 2018 Jaguar XF Sportbrake.

A rose by any other name? For most American motorists, the word, “wagon” carries with it a whiff of rotten eggs. So, most manufacturers either avoid the two-box body style entirely or hope to find a more pleasing alternative, such as Jaguar’s “Sportbrake.”

We’re getting a look at the next wagon, er, Sportbrake to come from the British automaker in a teaser released this week. It gives us an overhead image of the new model, as well as an outline painted onto the main court at the tennis mecca of Wimbledon.

Whatever you wish to call it, expected to see the new Jaguar XF Sportbrake join the maker’s line-up in Europe a few months from now. And for those Americans who love a wagon, whatever it’s called, it’ll finally make its way to U.S. dealerships as well, this time around.

Wagons have long been a staple in Europe. Ironically, Jaguar was one of the last Continental manufacturer to add one to its line-up, long believing buyers would only accept the Leaper badge on a coupe, convertible, sedan or sports car. It has since discovered otherwise, with reasonably strong sales of its earlier two-box models (and an explosion in demand for its first-ever SUV, the F-Pace).

The original XJ wagon begat the first-generation XF Sportbrake which was offered between 2012 and 2015 – though none made it to the States. 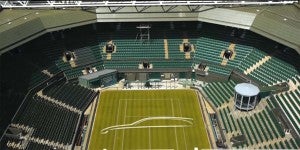 A silhouette of the new XF Sportbrake is painted onto center court at Wimbledon.

The new version appears to pick up on key queues from the latest XF line – or so we perceive from recent spy shots and the overhead teaser image. Among other things, it skips the XJ-style glossy black D-pillars this round, opting for more traditional, body-colored pillars below that nearly full-length Panorama sunroof.

Several questions are left unanswered: is this a single-piece glass roof? If so, where is the seam? If not, is there an alternative, slider option?

Inside, look for pretty much the same layout as the current XF, at least forward of the rear seats. That includes the maker’s big touchscreen infotainment system operating virtually all key vehicle functions.

The two teaser images suggest a steep slope to the roofline that will limit the usable cargo space. But for those who want maximum room, there is also the F-Pace.

As for powertrains, the expectations are that the 2018 Jaguar XF Sportbrake will share the same offerings as the rest of the model-line. Whether an SVR version will follow, we’ll have to wait and see. But expect a 247-horsepower 2.0-liter inline-our, as well as a 340-hp V-6. European versions also will get the Jaguar diesel. Whether that oil-burner makes it here to the States is uncertain. 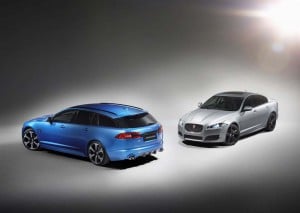 All but certain is that the XF sedan’s all-wheel-drive package will be offered as an option. Whether it will be available in the States – where it just might become a standard feature – remains another question we hope Jaguar will soon answer.

Incidentally, Jaguar is by no means the only automaker looking to dab some perfume on its wagons. Volvo is expecting about 10 times the demand for the new V90 Cross Country as for the V90 Wagon. And while Opel may be fine with its Astra wagon, the American version will go by the name Buick Regal TourX and be sold as a crossover.

(Click Here to check out the new Buick Regal TourX.)