Uber CEO Travis Kalanick has ordered an “urgent investigation” into claims raised by a female engineer who has gone public about allegedly endemic sexual harassment within the country’s largest ride-sharing service.

In an open statement, Susan Fowler Rigetti described “an organization in complete, unrelenting chaos,” alleging she was propositioned for sex on her very first day on the job, was repeatedly blocked from advancement and found Uber’s human resources department unwilling to take action on sexual harassment claims she and other female employees filed.

Her blog posting, titled “Reflecting On One Very, Very Strange Year At Uber,” quickly went viral and, by Monday, had generated a response from Kalanick who said in a tweet that “What’s described here is abhorrent & against everything we believe in,” adding that “Anyone who behaves this way or thinks this is OK will be fired.”

Kalanick promised to launch an “urgent investigation,” and Uber board member Arianna Huffington issued her own tweet saying she plans to participate in a “full independent investigation” with an outside researcher who had previously uncovered evidence of racial discrimination by some Uber drivers. 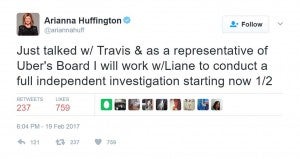 (Daimler developing ties to Uber. Click Here for more on plans to introduce a fleet of autonomous Mercedes models.)

Rigetti said she joined Uber in November 2015, working as a site reliability engineer based at the company’s headquarters in San Francisco. She said the trouble began immediately, her new boss propositioning her on the first day. Surprisingly, it wasn’t in some private office, but done through the corporate chat line, and Rigetti took screenshots.

But when she went to senior managers and, later, to Uber’s HR department, she claims, her concerns were rebuffed. She was advised her manager “was a high performer… and they wouldn’t feel comfortable punishing him for what was probably just an innocent mistake on his part. Only later did she realize that “one” complaint was actually one of many.

The problems mounted. While the director of engineering bought leather jackets for the male team members, the few females were left out because of the cost of ordering separate jackets for them.

Rigetti says she was then told by the director that, “because there were so many men in the org, they had gotten a significant discount on the men’s jackets but not on the women’s jackets, and it wouldn’t be equal or fair, he argued, to give the women leather jackets that cost a little more.”

The slights came, large and small. Her post contends that her personnel rating was cut so that the company wouldn’t pay for a Masters Degree program.

After a year, she chose to leave. Her blog post points out that during that shot tenure, the number of female engineers at Uber dipped from 25% to just 6%. But when she raised that with the department’s director, “his reply was, in a nutshell, that the women of Uber just needed to step up and be better engineers.”
(GM, Lyft set to deploy 1,000s of autonomous Chevy Bolt EVs. Click Here for the story.)

The sexual harassment flap comes at a time when Uber doesn’t need another black eye. The company reportedly lost thousands of users earlier this month when it was accused by some social media users of trying to undercut a New York protest of President Donald Trump’s immigration orders. Critics also cited CEO Kalanick’s decision to join the new White House economic advisory panel.

The Uber founder subsequently issued a statement opposing the so-called Muslim Ban, and has pledged financial aid to those Uber employees who might be impacted by the order, now blocked by a federal court.

Uber has had a few other embarrassing problems in recent months, including its short-lived attempt to run a fleet of autonomous Volvos in San Francisco while refusing to apply for the required state permit. It ended the project in barely a week.