Can humor bring both sides together?

In the current, highly charged political environment, automakers and mobility service companies are struggling to navigate their way through a potential minefield.

The problem is that even the most innocuous moves risk offending one group or another, something that has already resulted in calls for boycotts impacting several major firms. That includes both Tesla, the electric vehicle manufacturer, as well as Uber, the nation’s leading ride-sharing service.

At least one automaker has found a way to use humor to defuse the tensions touched off by last year’s presidential campaign, Korean carmaker Kia turning to comedian Melissa McCarthy in a widely praised spoof commercial that ran during Sunday’s Super Bowl.

For other companies, however, politics are no laughing matter.

That includes Tesla, which has been the darling of the environmental movement. But that support, which has generally been strongest among Democrats and other left-minded motorists, began to fray when the carmaker’s founder and CEO Elon Musk agreed to join the economic advisory panel set up by Pres. Donald Trump – after initially declaring Trump was “not the right guy” prior to the election. 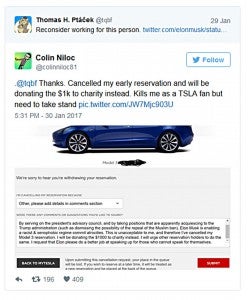 That soured some of Musk’s fan base in light of Trump’s long-stated claims that global warming is a “hoax,” perpetrated by the Chinese. Since assuming office, he and Republican lawmakers have also begun to rollback a variety of environmental regulations.

Concerns grew in the wake of the new president’s signing of an executive order that critics deride as a “Muslim Ban.” Musk said he would remain on the advisory panel, insisting he could be a “voice of reason,” positively impactin both the travel restrictions and Trump’s environmental position by having a direct link to the president.

But in recent days, the social media world has been buzzing with reports that some potential customers who had placed early reservations for the upcoming Tesla Model 3 battery sedan were pulling the plug.

“Thanks,” said Colin Niloc, who was one of around 400,000 who have placed $1,000 deposits for the Model 3 since it was first revealed last March 31. “Cancelled my earlier reservation, and will be donating the $1k to charity instead. Kills me as a TSLA fan but need to take stand,” he said in a tweet accompanied by a screen shot of his cancelled reservation.

Exactly how many have cancelled out on the Model 3 and two existing Tesla battery-electric vehicles, the bigger Model S sedan and Model X SUV, is uncertain. Tesla spokespeople did not respond to several requests for comment.

Some twitter users said they would maintain their orders, hoping Tesla CEO Musk actually can bring a more environmentally friendly mindset into the Oval Office.

The immigration and travel ban has generated an unusual level of criticism from the business community, especially in Silicon Valley, where many workers are foreign-born. Google and Apple are two of the highest-profile critics. But Ford Motor Co.’s Chairman Bill Ford and CEO Mark Fields have also denounced the executive order.

Company insiders had been expecting General Motors to follow suit, but the company has so far remained silent on the ban, and Chairman and CEO Mary Barra went ahead with a planned meeting with the new president last week. Barra also serves on the advisory council.

GM has, if anything, has faced a threat from the new president, who attacked the maker for importing a version of its compact Chevrolet Cruze from Mexico. Trump warned GM in his own tweet that it could be hit with a “big border tax.” (He has made similar threats against Ford and several other automakers.)

Several observers have warned that Barra’s position on the advisory council could turn off potential GM buyers – in particular, those who might have considered cancelling out on the Tesla Model 3 in favor of GM’s new Chevy Bolt, its first long-range, mainstream-priced battery-electric vehicle. Company officials have declined comment.

One initial member of the Trump advisory panel has already quit to get himself and his company out of the political spotlight. But Uber has nonetheless been hit hard by a boycott launched under the hashtag #DeleteUber. According to a report in the New York Times, over 200,000 customers deleted their accounts over the past week.

The boycott was touched off by reports that Uber was reducing the price of rides to New York’s JFK Airport the day after the travel ban order was signed by the president – critics claiming the ride-sharing service was trying to short-circuit a boycott by immigrant taxi drivers in the Big Apple. Uber reversed that move and CEO Travis Kalanick issued a statement criticizing the president ban, while also offering financial help to drivers impacted by the executive order.

“Joining the group was not meant to be an endorsement of the president or his agenda but unfortunately it has been misinterpreted to be exactly that,” Kalanick explained in an e-mail sent to employees.

On the other hand, Uber’s chief rival, Lyft, became a darling among Trump opponents when it announced it would donate $1 million to the American Civil Liberties Union, the non-profit group that has challenged the president’s ban. Apple’s App Store now reports Lyft’s own smartphone app has risen to become one of the service’s top 10.

With politics seeming to infuse not just social media but virtually every aspect of American life, it probably should be no surprise that political story lines were unusually apparent throughout the Super Bowl on Sunday. And, in a number of instances, from companies not usually seen as taking political stands. That included 84 Lumber, which ran a spot following mother and daughter as they tried to illegally enter the U.S. from Latin America. The home improvement firm’s servers reportedly crashed in the wake of the game from all the traffic the spot generated.

Audi and Kia avoided the immigrant issue but touched on other causes. The German maker used a serious tone to express its support for equal pay and gender equality. Kia, meanwhile, relied on a slapstick spot featuring comedian McCarthy called on the volunteer for a variety of environmental causes. But whether it was saving the whales or hugging trees, nothing seemed to go right.

For the comedian, anyway. But the spot itself was widely hailed as one of the best of the game – perhaps because it offered a chance for everyone to laugh, rather than have to take sides.

One response to “Politics Creating Minefield for Auto Industry”