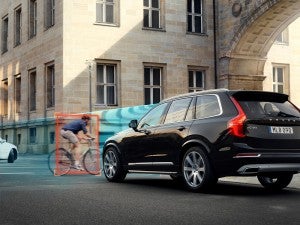 There are more than 1.2 million accidents every year involving vehicles and large animals, such as deer or elk, that result in the deaths of about 200 motorists and cause some $1 billion worth of damage, according to insurance industry statistics.

Now Volvo is attempting to reduce the number of these types of collisions by equipping its latest vehicles, including the new 2017 Volvo S90, with a “large animal” detection system that will apply the vehicle’s brakes if it senses anything from a fleet-footed deer to a lumbering bear in the roadway.

The system is described as an industry first and addresses a growing problem in many parts of the country, such as the heavily-wooded Northeast, where wildlife has proliferated in suburban and urban areas.

In addition, Volvo also plans to retro-fit XC90s sold during the past year with the system when the vehicle is brought in for routine service, according to Jim Nichols, Volvo technology and communications manager.

Nichols said the large animal detection system is basically an extension of Volvo’s “City Safety” system that was introduced on the XC90 and that automaker has said would be updated as new technology becomes available.

“It is the first time we have be able to go back to previous vehicles on the SPA platform and add in a safety feature,” added Nichols, who said he did not know if other automakers have done the same.

The large animal detection alert is specifically designed to identify the threat from a large animal in or even near the road and prepare the vehicle to avoid or mitigate a collision by applying the brakes. It is designed to come to a full stop at 17 miles per hour and the system can slow substantially the speed of a vehicle traveling up to 30 miles per hour.

The computer code used for animal detection takes builds on the experience Volvo has had in devising ways to avoid or mitigate collisions with pedestrians or cyclists, he added.

In the case of cyclists crossing the path of the car or suddenly swerving out in front it. City Safety is able to avoid a collision if the relative speed difference is up to 28 mph. At higher speeds, the automatic braking can mitigate the consequences of the collision.

If a pedestrian walks out in front a vehicle, City Safety is also able to avoid a collision at speeds up to 28 mph. At higher speeds, the automatic braking can also help mitigate the consequences of the collision.

With City Safety, when the driver turns left or right in left-hand traffic. City Safety detects a potential crash and brakes automatically in order to avoid a collision or mitigate the consequences of a crash.

The City Safety system is also able to avoid a collision if the relative speed difference between the two vehicles is up to 31 miles per hour. At higher speeds, the automatic braking helps to reduce the consequences of the collision.

(To see more about the rising death toll on U.S. roads, Click Here.)

The safety system is part of Volvo’s goal of eliminating any and all fatalities in its vehicles no later than 2022, Nichols said.