Zetsche thinks future is battery electric based on costs. 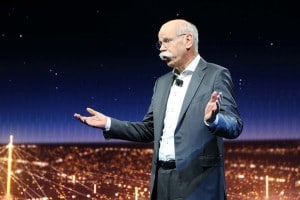 Daimler's Dieter Zetsche says that Mercedes will have a fuel cell vehicle on the road next year, he believes the future is battery electric.

The head of research at Daimler AG said Mercedes-Benz will have a fuel-cell vehicle ready for the road next year, but the company’s chief executive officer, Dieter Zetsche, also raised new doubts about the viability of hydrogen as at automotive fuel during a session with reporters on the sidelines of the North American International Auto Show.

“There is a disconnect,” noted Zetsche. Right now battery-electric vehicles have gained an edge over fuel cells, he noted. “Five years ago they seemed to be equal,” But fact of the matter is that there is a lot more money being spent on battery electric vehicles than in research on hydrogen fuel cells. “The potential advantages of fuel cells have diminished,” he said.

In addition, the infrastructure issues associated with hydrogen fuel cells remains formidable. People talk about the hydrogen highway in California, but the progress is very slow and very limited, he suggested.

Zetsche also noted the so-called wells-to-wheels discussion about carbon dioxide emissions, which seemed to favor hydrogen, is beginning to tilt in favor battery-electric vehicles. Battery electric and vehicles that depend on coal-fired generating plants to produce electricity might not help reduce carbon dioxide emissions overall. But the fact is there is a path to reducing the emissions for coal-fired generating plant.

It’s not so clear that you can produce substantial amounts of hydrogen without hurting the environment, he said.

“There is no feasible way to produce carbon dioxide hydrogen,” added Zetsche, noting zero emissions of carbon dioxide remains an important goal for carmakers around the world.

Thomas Weber, the member of the Daimler AG Board responsible for research and development, said that the German automaker is committed to building a vehicle powered by a hydrogen fuel cell next year. But Daimler the cost of batteries that would extend the range of electric vehicles has dropped dramatically in recent years and the range has steadily increased.

The improvements in cost and performance of battery electric vehicles are accelerating, he added. By 2020, batteries will have the capability of delivering the kind of performance that automakers initially thought would not be available until 2025. In addition, there is a lot of competition now, particularly in East Asia, among battery makers that is helping drive down costs.

Daimler is committed to bring out a battery-driven SUV that will have range of between 400 kilometer and 500 kilometers, or about 250 to 300 miles, he added. But Weber declined to say specifically when it might appear on the road.

Mercedes-Benz also will have offer a plug-in version of its new 2017 Mercedes-Benz E-class and Weber said plug-in feature, which means the vehicle can run on battery power part of the time, will not be subsidized. In fact, Daimler will make a profit on the vehicle, Weber said.