Audi Shoots for the Moon 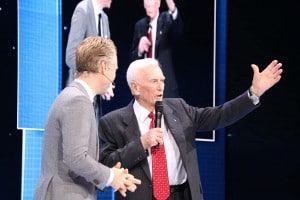 Audi's U.S. CEO Scott Keogh, left, and Gene Cernan, the last man to walk on the moon, talk about Audi during the Detroit Auto Show.

It weighs just 75 pounds, boasts wheels made of a titanium-aluminum alloy, and its “sunroof” is an array of solar panels. The little buggy rolling around the Audi stand at the North American International Auto Show isn’t nearly as sleek and sexy as the rest of the vehicles Audi has on display. But it doesn’t have to be, not when it comes time to start rolling around the surface of the moon.

The German maker is lending its financial support to a team of scientists chasing the latest Xprize. They hope to launch their mobile lab next year atop an Indian rocket, and if all goes well, it will travel nearly a quarter-million miles before landing on the Taurus Littrow Valley – which just happened to be the last place an Apollo moon mission landed 43 years ago.

“We plan to go back and look at the (lunar rover) they left behind,” Karsten Becker, a member of the German team told TheDetroitBureau.com. During the 11 days it’s expected to be operational, the Audi-funded buggy will also perform a wide range of experiments before being plunged into the deep freeze of a lunar night.

Along with several members of the moon mission team, Audi invited Eugene Cernan to come up on stage, Cernan earning credit as the last man to walk on the surface of the moon 43 years ago.

(Audi introduces next-gen A4 in Detroit. For more, Click Here.) 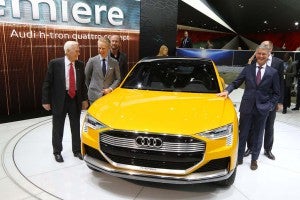 Cernan, Keogh and other Audi officials unveil teh Audi h-tron with at the Detroit Auto Show.

“Strap a rumble seat to it and I’ll go along for the ride,” the former astronaut joked. But he also said the project is just the sort of enlightened challenge mankind today needs. “Not enough inspiration is being provided to our youngsters to dream,” he suggested.

Audi’s involvement in the Xprize effort is not entirely surprising. The automaker aims to position itself as one of the industry’s technology leaders. During its auto show news conference, CEO Rupert Stadler announced Audi will introduce its Piloted Driving system sometime in 2017. Unlike rivals Tesla, Nissan, Ford and Mercedes-Benz, Audi’s system will be a full-, rather than semi-autonomous system, capable of driving on all roads and under all weather conditions, Stadler later told TheDetroitBureau.com.

The automaker is betting technology will transform virtually every aspect of the automobile. It recently outlined plans to have 25% of its sales accounted for hybrids, plug-ins, pure battery-electric and other green machines.

Among other things, CEO Stadler outlined plans to bring three new plug-in hybrids to market in the next three years, declaring the technology, “Our priority number one.” But Stadler said Audi is looking at a variety of other green powertrain technologies, as well. It expects to have its first pure battery-electric vehicle, or BEV, on the road by 2018, and could follow with a fuel-cell vehicle.

The maker gave an example of what that option might look like in the form of its new Audi h-tron Quattro concept, a prototype based on its upcoming Audi A4 allroad Quattro. The concept vehicle pairs the latest version of Audi’s fuel-cell stack with a lithium-ion battery. The hybrid powertrain can produce about 200 horsepower and launch the h-tron from 0 to 60 mph in less than seven seconds.

Its wheels powered by two electric motors, the Audi h-tron would have about 600 kilometers, or slightly less than 400 miles, range with a full charge and tank of hydrogen. Refilling the tank would take just four minutes, according to Stadler.

Audi actually lags behind a few competitors, including Hyundai and Toyota, both of which currently offers a hydrogen fuel-cell vehicle on the retail market. Honda will follow later this year.

Stadler said Audi is waiting to ensure there will be a viable refueling infrastructure. Currently, there are only a handful of them available in the U.S., most in Southern California. But a number of states, including California, are looking to set up a hydrogen distribution network. And if that happens, the CEO said a production version of the Audi h-tron could hit the roads by as early as 2020.