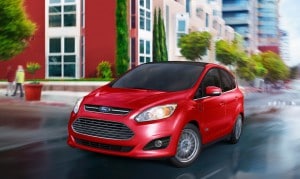 Ford is offering free charging to some 2016 C-Max Energi owners or lessees.

With gas prices low and sales of fuel-efficient hybrids equally low, Ford is hoping to spur sales of its C-Max Energi hybrid by following the lead of other automakers with free charging.

Nissan offered free charging to Leaf owners in selected states in an attempt to boost sales of the compact, and all Teslas have free access to any of the company’s thousands of supercharging stations across the country.

Now Ford is partnering with EVgo for “EV 1-2-3 Charge” for unlimited access to charging stations in four-hour blocks. EVgo has more than 500 stations across the U.S.

Since it only takes 2.5 hours to charge the hybrid at the 240-volt station, the four-hour block is plenty of free juice.

“EV 1-2-3 Charge is a great way for customers to get the most out of their C-MAX Energi,” said Stephanie Janczak, Ford manager, electrification and infrastructure.

“We’re coupling a fun, versatile, environmentally conscious car with a complimentary charge program that is easy to use and can reduce cost of ownership. It’s a win-win.”

Beginning in December, Ford will make it easy for customers to find these charge stations with MyFord Mobile, which will identify participating stations with a pink-colored icon. The MyFord Mobile app and website are integrated with SYNC 3 – the vehicle’s in-car communications and entertainment system.

MyFord Mobile and myfordmobile.com allow plug-in electric vehicle owners to have a seamless connected car experience, giving them the ability to easily lock and unlock their vehicle, find where they parked, access charge status, mileage and driving efficiency, as well as schedule charge times – all with the touch of a finger. The app may be downloaded to an iPhone or Android phone and to Apple or Android Wear smart watches.

Energi drivers will receive a charge card, pun is likely intended, enabling them to use the EVgo stations across they country. A look at the map of EVgo stations show that, like most charging stations, they’re clustered in large cities.

Also unsurprisingly, the vast majority of EVgo’s stations are in California and Maryland, although they do have large numbers in Massachusetts and Texas with as sprinkling in New York, Georgia, Illinois and Colorado. Most of them are located near shopping and dining areas.

The move comes as C-Max sales were down last month by 18.1%: a gangbuster month for automakers. Further, the model is suffering for the year with sales off 20.2% to just 18,898 units compared with 23,693 units.

(Ford recalling 432,000 Focus, Escape, C-Max models because ignition switches made not shut off. Click Here for the latest.)

It’s not the only maker struggling to move hybrids. Chevy Volt sales are down more than 29% through October, although saw sales spike upward 41% in October as it introduced the 2016 model.