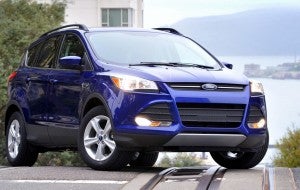 Ford Motor Co. is recalling about 432,000 cars, crossovers and “people-movers” because of a software glitch that might make it difficult to shut the vehicles off.

Ford says the problem is a flaw in the body control module used on three of its key product lines, the compact Focus sedan, the Escape utility vehicle, and the C-Max microvan. It can impact both vehicles with keyed ignitions as well as those with start/stop buttons.

If the system fails, the vehicles may keep running even if the ignition button is pressed or the key is turned to the “off” position and removed, Ford said.

The maker also noted that it knows of no crashes or injuries that have been caused by the problem.

Dealers will update the body control module software at no cost to the customer, the automaker noted.

Though one of the market’s most popular compact crossovers, the Ford Escape has been subject to an ongoing series of recalls since it was redesigned a few years ago, including several linked to potential fire problems. Just last week, Ford recalled 203,500 of its Escape and Transit Connect models because of problems with their instrument panels and seatbelts.

(Potentially defective truck hitch could be cause of fatal crash. Click Here for more.)

The new Administrator of the National Highway Traffic Safety Administration was grilled by members of a Senate committee last week following on a harshly critical audit of the agency. In turn, NHTSA chief Mark Rosekind has promised to crack down on industry lapses.

Ford’s cross-town rival, Fiat Chrysler Automobiles, is today facing its own hearing, Rosekind accusing that make of “a pattern” of failing to follow federal safety guidelines.