Ford Facing the “Squeeze” in Europe

Ford of Europe Pres. Jim Farley during the Geneva unveiling of the maker's new Focus RS.

Ford Motor Co. may finally be turning the corner after years of losses in its European operations. But while things are generally moving in the right direction, Ford’s new European President Jim Farley warns that the carmaker is facing what he calls the big “squeeze.”

The Detroit maker, like crosstown rival General Motors, has been struggling for years to turn things around in Europe. Though it had hoped to approach breakeven last year, Ford still posted a $433 million European loss during the final quarter of 2014, and $1.1 billion for the full year.

It remains to be seen if it can meet its target this year. But there’s clear momentum, stressed Farley, during an interview in Geneva. “We’re going to make progress, despite the headwinds, in our financials.”

A product blitz is proving to be critical to the maker’s turnaround formula. Ford had originally planned to bring out 15 new or refreshed models in Europe during a five year run from the beginning of 2014, but it has raised that target to 25. That covers a wide spectrum from the little EcoSport SUV to a new version of its big Transit van. 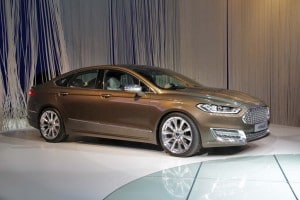 There’s the new Focus RS performance model given its first public showing at the Geneva Motor Show last week. And European buyers will finally get a chance to buy the Mustang, the new 50th anniversary remake designed for global distribution.

(Click Here for more on the new Ford Focus RS.)

Among the more critical introductions coming up in Europe, Ford has added a new Vignale trim model to its Mondeo line. It’s even more up-market than the older Fusion Platinum. And it’s part of a strategy to fight back against luxury makers like BMW and Mercedes-Benz who have been moving out of their traditional, high-line segments to attack more mainstream brands like Ford.

“We have to stay competitive with the luxury makers that are coming down,” explained Farley, even as Ford has to also cope with “value brands,” such as Russia’s Dacia that are squeezing Ford and other mainstream makers at the low end of the market.

(Ford’s new GT will be its most expensive model ever. How much? Click Here  to find out.)

Ford has begun building momentum in some critical segments. Its overall European market share rose to 7.6% at the end of 2014, much of that driven by strong demand for the Transit, the smaller Transit Connect and other new commercial vehicles. During the fourth quarter alone, Ford gained 2.8 points of share in the segment, to end the year at 11.7%.

But those headwinds remain worrisome. Ford’s year-end numbers would have looked significantly better, analysts note, had it not been for the collapse of the Russian car market. Ford has had to sharply pare back production at its St. Petersburg assembly plant and raise prices to account for the tumbling ruble.

“We feel very strongly Russia is a very important market for us,” Farley said, stressing that Ford is focusing on “the long-term potential” there.

The problems in the heart of the old Soviet Union have been an unexpected setback to the recovery of the overall European car market – which just began its own turnaround late last year after the worst slump in decades.

Ford was forced to make major cutbacks to cope with the downturn, including the closure of once-huge assembly operations in the U.K. The maker has shifted much of its focus to a mega-plant in Valencia, Spain that has a rated capacity of 400,000 units a year.

“Our response is to put product into the marketplace,” emphasized Barb Samardzich, Chief Operating Officer of Ford of Europe. “We have to be ready when the market begins to pick up, as it’s beginning to in Europe right now.”

(Ford puts pedal to metal with new electric bike. Click Here to check it out.)