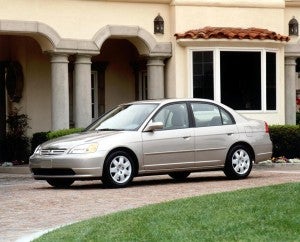 A 2002 Honda Civic. One of millions of Hondas equipped with suspect Takata airbags.

Honda earnings took a sharp tumble during the most recent quarter, hammered by a variety of problems including the maker’s airbag recalls, as well as sluggish sales in its home Japanese market.

The maker announced the 15% decrease in net income a day after it said it received reports of two more drivers, including one in Houston, who may have been killed by flying debris caused by the explosive malfunction of its airbags.

Honda has been forced to recall millions of vehicles using the supplemental restraint systems produced by supplier Takata. It also had to fix problems with its new Fit subcompact. Analysts have estimated the recalls have cost Honda about $255 million, or 30 billion yen – though the maker did not break out details.

For its part, Honda only referred to “quality-related expenses in North America” as the primary reason why earnings fell during the third quarter of its fiscal year.

A wide range of other manufacturers have been impacted by the airbag problem, ranging from BMW to General Motors to Toyota, a total of more than 10 million vehicles now subject to recalls.

Honda, which has close financial ties to Takata, recently announced it will switch to a different airbag supplier for the updated version of its popular Accord line.

(Honda has both some of safest, worst vehicles in new IIHS study. Click Here for more.)

The airbag issue has given Honda’s normally pristine image a black eye. It was heavily fined by the U.S. government for under-reporting deaths and injuries linked to vehicle defects, and it has been faulted for not acting quickly enough to recall vehicles equipped with the Takata airbags.

The supplier itself has resisted calls for a nationwide service action, insisting only vehicles sold in regions with high humidity need repairs. Honda – and a number of competitors – late last year decided to expand the recall anyway.

“We want to improve the rate of repairs on recalls and to repair them quickly,” CEO Tetsuo Iwamura said during a discussion of the maker’s third-quarter earnings.

The maker said it also expects to see net income for the full year ending on March 31 to come in at $4.6 billion, down from an earlier forecast of $4.8 billion.

Operating income fell by 22.5% for the latest quarter. Along with the Takata airbag issue, Honda was hurt by sluggish demand in Japan. New car sales there have been in the doldrums since the government enacted a big sales tax hike last spring. The situation isn’t expected to improve anytime soon, as another take hike is planned.

There were some positive developments. Honda saw sales of its motorcycles surge in Asia, and it benefitted from a weakening of the yen.

Nonetheless, said Iwamura, “the boost (in profits) from the foreign exchange factor was offset by a decline in (automotive) sales volume, and the increase in quality-related costs led to a cut in full-year profit forecasts.”

Both Nissan and industry leader Toyota are expected to report improved earnings early next month.