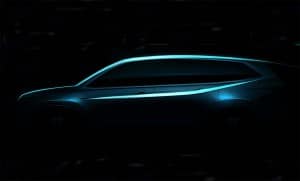 Honda is teasing the introduction of its redesigned Pilot at next month's Chicago Auto Show.

It’s going to be a big year for Honda, and after announcing an array of future new green machines during its Detroit Auto Show news conference, the Japanese maker is about to return to the present. Well, make that the very near future, as it plans to pulls the wraps off the all-new 2016 Honda Pilot during a news conference at the upcoming Chicago Auto Show.

The original Pilot was a boxy minivan alternative. The next-gen model got a little more stylish but maintained a clear emphasis on being a people-mover, rather than an off- or even soft-roader. Once again, the third-generation Honda Pilot is expected to target buyers who want minivan functionality – with seating for up to eight – but a bit more style.

According to a statement from Honda, “The new Pilot represents a dramatic shift in design, while showcasing new standout technologies, versatility and dynamics currently unavailable in the mainstream SUV segment.”

Honda has been expanding and upgrading its ute line-up, most recently with the addition of the all-new HR-V targeting the fast-growing compact crossover niche. The old base ute, the CR-V, has moved up a bit to make room for the little addition, and the new 2016 Honda Pilot is expected to nudge up a little more.

Look for a variety of features to be added, such as the unique Honda blind-spot detection system that uses a rear-facing camera to check out the car’s right-side blind spot. The image is presented on the touchscreen display in such models as the Honda Accord.

Other possible additions could be lane-keeping assist and active cruise control. Safety is generally one of the highest priorities for the sort of family buyers who have traditionally flocked to the Honda Pilot. But an updated infotainment system is all but certain to be in the cards, as well.

The outgoing Pilot’s unibody platform was shared with the old Honda Ridgeline, the pickup Honda recently dropped from its line-up due to sluggish sales. The Japanese maker is planning to introduce an all-new version of the Ridgeline later this year, but it has not confirmed whether it will continue to share platforms with the Pilot.

The original Honda Pilot was designed and developed by Honda’s U.S. RD operations, and so has the new, 2016 remake. The outgoing model – along with its engine – has been assembled at a Honda plant in Lincoln, Alabama. That also is likely to continue.

(Click Here for more about the passing of PR vet Tom Kowaleski.)

According to some inside reports, the 2016 Pilot remake will deliver as much as 60 more horsepower with a 3.5-liter V-6 delivering as much as 310 horsepower. But in keeping with other recent entries, the third-generation crossover is likely to also boost fuel economy.

A front-drive model pairing its engine to a CVT is expected, while the all-wheel-drive package should get a six-speed automatic.

The 2016 Honda Pilot will make its debut at the Chicago Auto Show on Feb. 12. Honda’s upscale Acura brand will unveil a new version of its RDX crossover the same day.