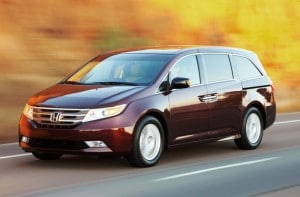 The 2011 Honda Odyssey was one of nine models to experience no fatalities during the study period.

(This story has been updated to include the list of the nine safest vehicles, and additional comments by IIHS.)

The highway death toll has been plunging rapidly in recent years, and safety experts are crediting a number of factors, including improved roadways and a crackdown on drunk driving. But a new study puts the spotlight on vehicle design and improved technology for both preventing crashes and keeping motorists alive when they do occur.

A record total of nine models sold during the 2011 model-year have had a death rate of zero, meaning no one was killed in a crash involving those vehicles during the period studied by the Insurance Institute of Highway Safety. Significantly, these are not ultra-exotic products. They include mainstream models like the Honda Odyssey minivan and Subaru Legacy sedan, as well as the big Mercedes-Benz GL SUV. (See the complete list, below.)

“We know from our vehicle ratings program that crash test performance has been getting steadily better. These latest death rates provide new confirmation that real-world outcomes are improving, too,” said IIHS vice president and chief research officer David Zuby.

On the whole, the insurance industry research group’s study shows, today’s cars, trucks and crossovers are getting safer. Had vehicles not undergone major improvements over the previous quarter century, estimated the IIHS, there would have been 7,700 more fatalities in just the year 2012. 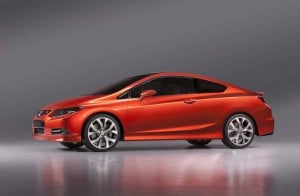 The 2011 Honda Civic had one of the highest death rates in the new IIHS study.

That is, in part, due to improved crash-worthiness. Since the IIHS introduced the tough new small offset crash test several years ago, a growing number of vehicles have begun passing. That’s important because the test is meant to replicate what happens when two cars clip one another going in opposite directions, or when a vehicle hits a pole or other small, stationary object.

IIHS Vice President Russ Rader also told TheDetroitBureau.com that new safety technologies, such as electronic stability control, have been playing a crucial role. The goal is to prevent crashes in the first place, and IIHS director Adrian Lund said that even newer technologies, such as forward collision warning, are taking things to the next level.

Rader also said the study appears to support the long-term goal of safety advocates who hope to see overall highway deaths drop to zero in the years ahead. That might have seemed unthinkable just a few decades ago, when more than 50,000 Americans were being killed on the roads each year. But the death toll has since dropped by almost 40%.

Volvo – whose XC90 was among the nine vehicles cited by the IIHS – has set a corporate goal of having no one die in a crash of one of its new products by the 2020 model-year.

While that may be difficult to achieve across the industry, the new study shows that among 2011 models, there were 28 driver deaths per million registered vehicle miles, down from 48 in 2008 and 2009 models. A registered vehicle year means a vehicle that has been registered and in use for one year.

“This is a huge improvement,” said IIHS research chief Zuby.

The IIHS study also reveals a wide gap between the best and worst vehicles on the road. A total of 19 models sold during the 2011 model-year had death rates of five or less. But the 19 worst vehicles had rates of 46 or more. At the bottom was the Kia Rio, which had an overall death rate of 149, followed by the Nissan Versa sedan, at 130.

The list of the most deadly models was filled with compact and subcompact products, but several large models were also included. The Chevrolet Chevrolet Silverado Crew Cab 4WD had an overall death rate of 79, while the full-size Mercury Grand Marquis sedan had a death rate of 67.

Notably, some manufacturers had products at both the top and bottom of the list. While the Honda Odyssey minivan was among the nine models with a zero fatality rate, the IIHS study found the 2-door version of the small Civic had a death rate of 76, while the four-door Civic came in at 49.

While the study focused on products from the 2011 model-year, a number of the vehicles included in the report have undergone significant updates since then, often achieving major improvements in IIHS tests. The Toyota Prius, for example, was one of the worst in the small offset crash test when it was introduced. An updated version of the Prius recently received one of the top scores.

“The complete elimination of traffic deaths is still many decades away, and, along with vehicle improvements, getting there will require changes in road design and public policy that can help protect all road users,” Zuby says. “Still, the rise in the number of vehicles with zero driver deaths shows what’s possible.”

(A single insurance claim can bump premiums up by 76%, says new study. Click Here for more.)

Vehicles With Zero Deaths Reported During the Study Period: