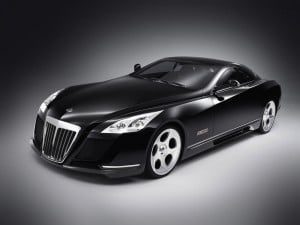 Jay Z tops the list when it comes to who spent the most for a car. He dropped $8 million for a customized version of the Maybach Exelero.

The bids will be flying when the action begins on the Monterey Peninsula this long weekend. The annual Pebble Beach Concours d’Elegance brings more than a half-dozen auctions, and seven-figure bidding has become the norm, rather than the exception, in recent years. Collectors have been bidding up some of the world’s rarest models, such as the 1963 Ferrari 250 GTO that went for a record $52 million last year.

Some of the most expensive collectible cars have been bought and sold privately, many serious collectors happy to live in anonymity. On the other hand, celebrities are often more than happy to share with fans their latest acquisitions, among them Porsche fanatic Jerry Seinfeld and comedian Jay Leno, who has filled several airport hangars with his bulging collection.

Still other celebrities, however, prefer to shop for – and show off – something new, and website FinancesOnline set out to find the 12 most expensive celebrity cars, a list capped by Jay Z’s customized Maybach Exelero. First shown in his “Lost One” music video, it cost a cool $8 million. 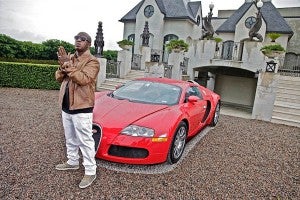 Rapper Birdman dropped more than $2 million on his Bugatti Veyron.

It’s probably no surprise that rappers, who embrace a high-profile, high-spending lifestyle, lead the list of most expensive road cars, according to the website’s research. In fact, seven of the 12 are owned by rappers, including Flo Rida, Lil Wayne and Birdman.

(Click Here for details on best cars for city dwellers.)

And their favorite set of wheels? The Bugatti Veyron, which accounts for nearly half the list. Other exclusive models among the top 12 are a Rolls-Royce Phantom Drophead owned by David Beckham, another Maybach, a Porsche 959, a Ferrari Enzo, a Mercedes-Benz SLR McLaren, and a Lamborghini Aventador.

1) Jay Z’s Maybach Exelero made an appearance in his “Lost One” video. It’s a heavily customized version of the big sedan and a rarity considering parent Daimler AG recently abandoned the Maybach brand;

2-4) Three rappers actually tied with $2.7 million versions of the Bugatti Veyron, including one Lil Wayne loved enough to name a rap about. The Game opted for a black and yellow model, while Flo Rida started out with a white Bugatti, later wrapping it all in gold;

5) Birdman apparently got a bargain, only spending $2 million for his Veyron – and after he backed out of buying a Maybach Exelero, something he is apparently fond of posing with in his selfies; 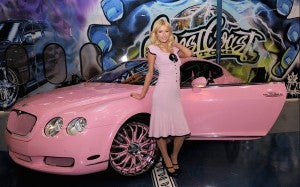 Despite a price tag of more than $285,000, Paris Hilton's pink Bentley didn't make the top 10 most expensive celebrity rides.

6) When he’s not judging talent on TV, Simon Cowell spends time cruising in yet another Bugatti Veyron, this one at a mere $1.7 million;

7) Kanye West prefers to go with a Lamborghini Aventador, a $750,000 supercar that was damaged when a service driver was hit by the electric gate at the home of West’s now-wife Kim Kardashian;

8) Jerry Seinfeld has a massive collection of rare Porsches, but apparently does drive a relatively new 959, as well. The supercar is valued at $700,000;

9) Another celebrity collector is Nicholas Cage who favors a $670,000 Ferrari Enzo, one of only 399 ever made;

10) We have to question how Jay Leno landed so low on the list considering he has several 100 vehicles in his collection, but according to FinancesOnline, his preferred set of wheels is a $500,000 Mercedes SLR McLaren;

11) Musician Rick Ross not only bought a Maybach 57 but also named his band, the Maybach Music Group, after his $430,000 set of wheels;

12) David Beckham’s Rolls-Royce Drophead Coupe may be the most sophisticated, and least outlandish, of the dozen celeb-mobiles. He’s often seen driving the family around in the $407,000 convertible.

Incidentally, if you notice that there are no women in the list, Paris Hilton came closest, reaching 13th position with her $285,000 Barbie-pink Bentley Continental GT.