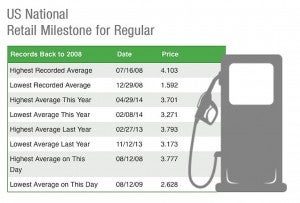 Gas prices are predicted to drop through the fall.

Ongoing strife in Iraq and Ukraine should be a recipe for a gas price hike in the U.S.; however, the national average retail price for a gallon of regular unleaded continues to fall: a trend that is expected to continue.

The U.S. Energy Information Administration, also known as the EIA, predicts further drops at the pump throughout the third quarter of this year as lower refinery margins offset higher crude oil prices. The agency expects regular gasoline retail prices to average $3.54 per gallon in 2014 and $3.45 per gallon gal in 2015, compared with $3.51 per gallon in 2013.

One region that ran against the trend last week was the Midwest, according to GasBuddy. Problems at four refineries in the region caused a temporary spike in prices pushing them over $3.50 per gallon. The region is still slightly higher than the national average as a result.

“You’ll see some price increases after 40 days of steady decreases, but this is not a second wind for lofty gas prices,” stressed Tom Kloza, chief oil analyst for GasBuddy. “We may see sub-$3 gal prices disappear in some states where they popped up recently, but those numbers will be back in autumn.”

Oil prices remain low and supply is plentiful, traders said. The futures price for Brent crude oil for Oct. 1, eased 19 cents to $104.49 a barrel, while U.S crude prices dropped by 28 cents to $97.80 per barrel.

The potential for the kind of oil shocks that have periodically rocked the U.S. economy since 1973 have been diminished by a combination of rising production in the U.S. and the steadily rising fuel economy of new vehicles sold in the U.S.

(Click Here for details about the mix of new and old coming to the Pebble Beach Concours.)

(To see why the Kia Soul is the best car for big city denizens, Click Here.)

Shrinking demand for gasoline because of increasing fuel economy in new vehicles, which is expected to improve again next year despite a shift in consumer preference towards trucks and sport utility vehicles has helped offset the rising demand for gasoline and diesel fuel in other parts of the world such as China.