Over half have bachelor’s degree. 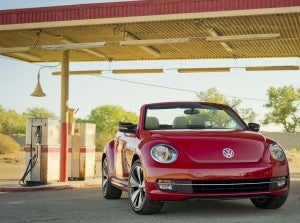 The Beetle Convertible was last year's most popular ragtop - but only #48 on the U.S. sales chart.

Don’t let it go to your head, but if you drive a convertible, chances are you’re both more educated and more affluent than the typical American motorist, or so shows a new study from Experian Automotive.

You’re also  lot more likely to live in one of the sunshine states, especially California, Texas or Florida – though ragtops also have plenty of fans in more northern climes, including coastal communities in New York, as well as that heartland state, Illinois.

While convertible sales have been shrinking in recent decades, most manufacturers offer at least a couple ragtops, and though luxury makers typically have more models in their line-ups, some of the most popular models are mainstream offerings, such as the Ford Mustang convertible and Mazda Miata roadster, noted Experian.

“The one long-standing perception of convertible vehicles is that they are driven predominately by consumers who live in sunny, coastal areas,” said Brad Smith, director for Experian Automotive. “While that notion certainly rings true, it’s not the only difference. Our research shows that convertible drivers also tend to be more affluent than the average new car buyer. One explanation to this could be that more luxury brands tend to have a convertible option.” 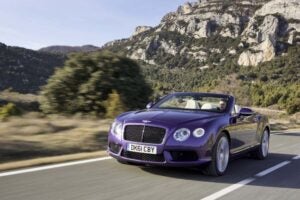 Luxury makers tend to have the biggest choice of convertibles, such as this Bentley GTC.

The study, which focused on the first quarter of 2014, found that fully 50% of all convertible buyers had at least a bachelor’s degree, compared with just 38.2% of all new car buyers. Nearly one in five ragtop purchasers had incomes of at least $175,000 a year, and 11.7% owned homes worth more than $1 million. By comparison, the figures were 10.7% and 4.4%, respectively, for buyers on the whole.

No surprise, Sunbelt states dominate demand for those who like to drive al fresco. In fact, Experian’s research found that 23% of all convertibles were registered in just three states – 13.4% in California, 9.6% in Florida, and 7% in Texas. Rounding the Top Five, New York accounted for 4.3%, and Illinois 3.9%.

In terms of individual communities, Los Angeles, at 6.4%, was number one, but here New York City shot to the second spo, at 5.2%, followed by San Francisco, Chicago and Atlanta.

As for the Top Five convertibles on the road during the first quarter – including both new and old models, they were:

Significantly, where the convertible was once were among the most popular body styles with American motorists, demand has steadily shrunk over the last half century. At one point, in the late 1970s, there wasn’t a single ragtop available on the U.S. market. Makers began to reintroduce them in the 1980s, starting with the Chrysler LeBaron Convertible.

(Wondering what the worst cars of the past decade were? Click Here to find out.)

Today, there are dozens of open-top models available, from the little Miata all the way up to the likes of the new Ferrari California and Bentley GTC lines. But demand has continued to slide. The best-selling model, the Volkswagen Beetle Convertible, ranked just 50th among all vehicles available on the U.S. market in 2013, generating a meager 18,000 sales.

There are today just 4.5 million convertibles registered in the U.S., according to Experian, representing a modest 1.8% of the total American fleet.

Weak demand convinced Chrysler not to add a convertible version to the new 200 line, the successor to the old Sebring. Nonetheless, the industry shows no signs of repeating what happened three decades ago, when ragtops seemed an endangered species – perhaps because, while small in number, today’s affluent, educated owners are precisely the sort of buyers automakers want most to draw into their showrooms.