Windshield Washer Fluid Could Expose You to Legionnaire’s Disease 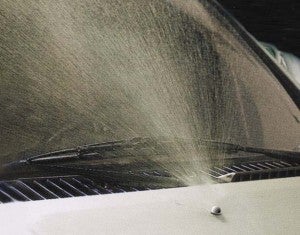 A new study suggests that spray could expose you to deadly Legionnaire's Disease.

Your windshield wipers are supposed to help keep you safe, especially when you use the washers to clear off salt and road grime. But a new study finds that washer fluid may commonly contain the bacteria that causes deadly Legionnaire’s Disease.

The report, presented at the American Society for Microbiology’s annual meeting, found that the bacterium – which causes a pneumonia-like illness – was present in in the washer fluid reservoirs of 75% of school buses tested in a central Arizona school district. Further research found Legionella bacteria can survive in the fluid for up to 14 months.

The real danger is what happens when a motorist sprays that fluid onto the windshield, said study author Otto Schwake, a doctoral student at Arizona State University.  “Washer fluid spray can release potentially dangerous numbers of these bacteria into the air. These results suggest that automobiles may serve as a source of transmission for Legionella infections.”

Legionnaire’s Disease got its name in 1976 after a mysterious disease struck at a hotel in Philadelphia attended by members of the American Legion. Of 182 cases reported among the group, 29 people died. The disease has since struck in a variety of places, including tour ships. The naturally occurring Legionella bacteria is found in water, transmitted through such things as air conditioners and hot tubs, or through water mists.

Though many exposed to the bacteria don’t become ill, it can be deadly to others, especially the elderly and those with weakened immune systems.

“While potential transmission of a deadly respiratory disease from a source as common as automobile windshield washing systems is significant, the study also points to the fact people can be exposed to pathogens — particularly those occurring naturally in the environment — in previously unknown and unusual ways,” cautioned Schwake.

The study was conducted in an attempt to validate the results of research in Great Britain that suggested as much as 20% of Legionnaires cases there were caused by windshield washer fluid.

Additional research is needed to further confirm the results – and to see whether there was something unusual about the school buses that were tested, as well as whether the results can be duplicated in windshield wiper fluid used by personal vehicles.

(Click Here for details about the U.S. win over China with the WTO.)

But the study raises serious concerns about the possibility that washer fluid could serve as an unexpected way to both expose humans to the Legionella bacteria while also potentially spreading the pathogen to other bodies of water where it could thrive.

If the research proves valid it could pose serious problems that might require a change in the formulation of windshield washer fluid – or the development of an alternative method to sterilize liquids held in washer fluid reservoirs.