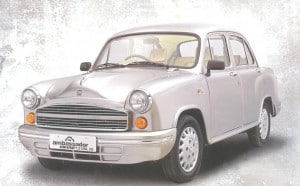 Hindustan Motors shut down production of its long-running Ambassador sedan. The King of Indian Roads was produced for more than 55 years.

Ford Mustang fans in the U.S. and mavens around the world have been celebrating the 50th anniversary of the first pony car. However, in India, many are mourning the apparent death of a car with an even longer history: the Hindustan Ambassador.

While the Mustang has carried on through several iterations – some better received than others – the Ambassador hasn’t changed much since its introduction in 1958. Despite its British origins, the Ambassador is called “The King of Indian roads.”

A clunky looking sedan with a bulbous front end, the car – known affectionately as the “Amby” – has been the preferred mode of transport for politicians and celebrities alike in India since it was introduced more than 55 years ago.

The automobile is produced at Hindustan Motors’ Uttarpara plant, near Kolkata, West Bengal. Nearly the clone of the British Morris Oxford III, the car’s hallmark has been its simplicity and reliability. For that reason, it’s primarily used as a taxi cab these days. The company touts the car’s role, proclaiming BBC’s Top Gear named it the “World’s Best Taxi.”

“Sturdiness is its hallmark,” the company said. “The robust build, it was always seen as a positive point for customers who wanted durability and safety.”

(Click Here for more about GM and Ford leading the patent pack.)

At one point it held 70% of the Indian auto market, however, since the Indian-Japan venture Maruti Suzuki began producing low-cost hatchbacks it’s share began to drop. It dropped again when the market was opened to foreign carmakers.

(To see the start of the slow tease leading to the reveal of the new XC90, Click Here.)

In fact, Maruti accounts for nearly half of the new cars sold in India. Amby sales have winnowed down more than 24,000 units in the 1980s to just more than 2,200 last year. The plant, which employed nearly 2,500 workers, also produces a work truck, ironically named “Winner.”