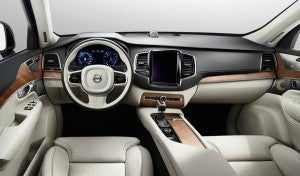 The all-new Volvo XC90 is getting a slow reveal from the Swedish maker. It's revealed the new interior in a series of photos, which will be followed by more information throughout the summer.

Swedish automaker Volvo kicked off the slow reveal of its update of its best-selling XC90 crossover by sharing photos of the interior of the car, which looked…well, Swedish thanks to tiny Swedish flags sewn into the seats.

The new interior is clean and simple. In the early photos released yesterday, the crossover will be swathed in leather and wood. It also features a prominent touch screen display in the center stack that will control a multitude of functions, including the maker’s new infotainment system. The XC90 is designed to accommodate seven passengers and it appears that it’ll do that just fine with seats that appear to recline for all passengers.

The all-new XC90 is the first Volvo to use the company’s Scalable Product Architecture (SPA), which allows the Swedish company to produce everything from sedans to coupes to this new crossover. This is the first vehicle created under the Geely regime, which bought Volvo from Ford a few years back. 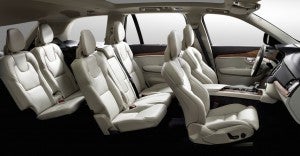 Not only does it give Volvo more design options, but also SPA is supposed to improve a vehicle’s driveability and ensuring all of the latest safety and entertainment features are included in new models while creating the maximum amount of interior space.

This new architecture enables the company to strengthen and reinforce its aim that by the year 2020 no one will be killed or seriously injured in a new Volvo.

The new crossover is likely to utilize the company’s new Drive-E engine platform. The platform features a variety of smaller displacement four cylinder engines augmented with turbochargers, hybrid powertrains and even a plug-in EV.

The new engines are part of the $11 billion investment in new products and powertrains by Geely aimed at getting the slumping automaker back on track. But the powertrain program isn’t without its risks, Volvo officials acknowledge.

Among other things, it will mean convincing upscale buyers who traditional equate displacement with desirability that a high-tech four-cylinder engine can be as good, or better, than the six- and eight-cylinder powertrains that traditionally dominate the luxury market. 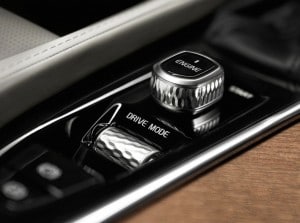 The goal is to create a family of “smaller, more intelligent engines that will turn the V-8 engine into a dinosaur,” Derek Crabb Volvo’s vice president of powertrain engineering to TheDetroitBureau.com in January.

The $11 billion authorized by the Chinese parent is funding, among other things, two new Volvo plants in China, including one that opened in Chengdu last year. Volvo has meanwhile worked up two new vehicle architectures, one for its smaller models, the second for larger vehicles such as the next-generation XC90.

(Click Here for plans to use solar cells on roads…or to electrify them.)

These new products will start phasing in over the course of the decade and they will switch to the new Drive-E powertrains. But Volvo isn’t waiting until then to begin using these all-new engines, which are being produced at its powertrain plant in Skovde, Sweden, which recently went through a $300 million expansion. They’ll be offered as part of the powertrain mix for the updated Volvo S60 sedan, V60 wagon and XC60 crossover, all three launching in the coming months as 2015 models.

(To see what company was named the “greenest” car company in the U.S., Click Here.)

Volvo’s new crossover is expected to hit the road in August, but the maker plans to hype it plenty in the interim with staggered releases of pictures and information about the new crossover throughout the summer.