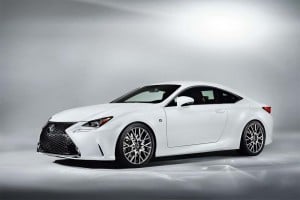 Lexus has been using the word “passion” a lot lately, both in terms of design and performance, and it appears ready to back that up when it comes to the launch of the new RC Coupe later this year.

We’ve already seen two sporty versions of the new 2-door, the RC 350 and the RC F, and it turns out we’ll be getting a look at a third model at the Geneva Motor Show next week, the Lexus RC 350 F Sport rounding out the new line.

For those not quite familiar with Lexus nomenclature – and it can be confusing – models designated with a simple “F” are the sportiest in the line-up.  Those dubbed F Sport are a little less extreme.

The F Sport shares the same basic 306-horsepower V-6 as the RC 350, rather than the rocket-powered RC F’s big V-8.  But it adds a number of features that, as the name implies, deliver both a more sporty look and driving experience, according to the maker. 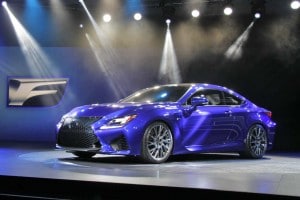 The Lexus RC F made its debut in Detroit.

That includes a “further evolution of the Lexus spindle grille,” explains Toyota, with the distinctive “F” mesh pattern.

(For more on the top-line Lexus RC F, Click Here.)

The RC F Sport gets some dynamic upgrades such as an Adaptive Variable Suspension and the Lexus Dynamic Handling system, as well as new 19-inch F Sport mesh alloy wheels finished in a dark metallic paint.

The adaptive suspension can independently adjust the damping of all four wheels to respond to driver inputs, vehicle body motion and road conditions.  There’s a Sport+ mode to maximize the aggressiveness of the system.  The LDH system, meanwhile, controls both the dynamic rear steering  and variable gear ration steering systems to improve steering response and handling. The rear wheels can turn by up to 2 degrees – in the same direction as the front wheels at high speeds, and in opposite directions at lower speeds, such as when you’re parking.

The third model in the RC line-up gets a driver’s meter with a moving center ring that’s lifted from the Lexus LFA supercar, as well as a unique F Sport perforated leather steering wheel and shift knob.  Rounding out the package are the exclusive Rioja Red seats and interior trim.

The new Lexus RC F Sport will debut on the morning of March 4th at Geneva’s PALExpo convention center. It will join the rest of the RC coupe line-up when all three models reach showrooms for the 2015 model-year.