"Back to the grind" takes on a new meaning. 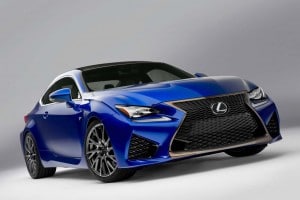 Lexus is back in the performance game with the new RC F set to debut in Detroit next week.

With rare exception, Lexus isn’t a brand folks typically associate with performance.  The asterisk on the line-up was the original Lexus IS-F, a V-8-powered monster that gave German competitors like the M3 reason to keep a watchful eye on the rearview mirror.

With parent Toyota Motor Co. CEO Akio Toyoda promising to put more “passion” into the brand, Lexus is ready to show that the IS-F wasn’t a fluke.  It’s been hinting for weeks that something sinister was in the works and now we’re getting more than just a series of teasers as the Japanese luxury maker lifts the current on the new Lexus RC F.

The performance coupe, the maker asserts, is “giving new meaning to ‘back to the grind,” with a big V-8 engine that is expected to deliver something in excess of the original IS-F model’s 407 horsepower.  Unfortunately, we’ll have to wait for the formal debut during the North American International Auto Show in Detroit next week to get precise numbers. 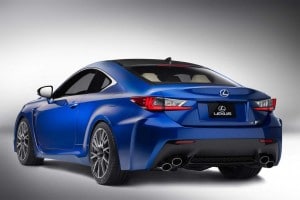 A deployable rear wing pops up at around 50 mph.

The “F” is based on the all-new Lexus RC revealed just months ago at the Tokyo Motor Show.  Much like rival BMW, Lexus cleaved its base IS line, renaming the new 2-door version the RC and giving it a more sporty look designed to provide a little more punch.  Among other things, the coupe adopts a more dramatic version of the now-familiar Lexus “spindle grille.” Under the hood of the RC350 is a 3.5-liter V-6, with the new RC 300h hybrid powered by the familiar Lexus Hybrid Synergy Drive system with an 2.5-liter inline-four.

With the RC F, the spindle grille adopts an even more distinctive appearance, highlighting a single “F” pattern. The hood has been raised to handle the massive V-8, and the overall front end is a bit more flared to emphasize the added muscle. There are added ducts in the fenders and beneath the front bumpers, an aero-stabilizing front fins.

Air outlets flowing out of the front fenders, meanwhile, form a Lexus “L” shape as they meld into side sill extensions. And the rear of the F model is distinguished by stacked trapezoidal quad tailpipes.  There’s a hint of the Lexus LFA supercar to the RC F, notably in the speed-sensitive rear spoiler that pops up at about 50 mph to add downforce at higher speeds. 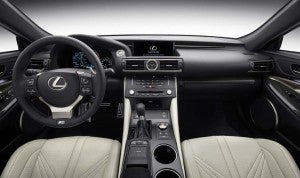 The seats, steering wheel, gauges and pedals are unique to the new Lexus RC F.

Three different versions of a new 10-spoke 19-inch forged aluminum wheel are available, including one that’s been hand-polished.

The cockpit features unique Lexus RC-F gauges – including a central reconfigurable meter that changes to reflect each of four selectable driving modes — ornamentation and pedals, as well as a thick, elliptical grip steering wheel designed to better fit the hand. The high-back sport seats are designed to be more supportive and boast an embossed “F” on the headrests.

Lexus is expected to have plenty more to say during its news conference at 8:45 AM on Tuesday, January 14th at Detroit’s Cobo Center.