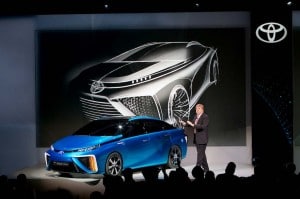 Americans are getting their first look at the hydrogen-powered fuel-cell vehicle that Toyota plans to put into production next year, and the maker is calling the FCV prototype a better mousetrap, a vehicle that can largely do anything a conventional, gas-powered automobile can do – minus the noxious emissions.

The Toyota FCV was first unveiled at the Tokyo Motor Show last November and is now on display at the Consumer Electronics Show in Las Vegas. It will make the trek to the Detroit Auto Show next week – where it will be joined by hydrogen-powered concept vehicles from both Honda and Hyundai.

“We aren’t trying to re-invent the wheel;  just everything necessary to make them turn,” said Toyota Motor Sales Senior Vice President Bob Carter, during a news conference at CES, the big consumer electronics trade show. “Fuel cell electric vehicles will be in our future sooner than many people believe, and in much greater numbers than anyone expected.” 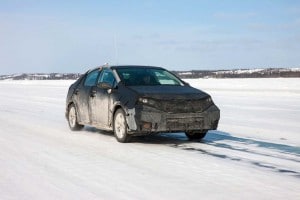 A production version of the Toyota FCV undergoing cold weather testing - sub-freezing temperatures used to be a problem for fuel-cell vehicles.

That might surprise some folks who thought that the time for the technology had come and gone.  Hydrogen power was hailed as the big green breakthrough a decade ago because fuel cell vehicle produce nothing but water vapor in their exhaust.  But the technology proved to be more challenging to bring to market than many proponents had expected – not only in terms of cost but also due to a complete lack of a hydrogen production and distribution infrastructure.

That led to a shift in focus to battery-electric vehicles, especially when the Obama Administration first came to office and diverted federal research dollars from hydrogen to batteries.  But with it proving more of a challenge to get battery-electric power into the mainstream, the spotlight has been shifting back to fuel cells.

The FCV prototype will be able to hit a top speed of more than 100 mph, Toyota claims, and launch from 0 to 60 in barely 10 seconds.

Significantly, even while fuel cell technology seemed to slip out of vogue, researchers were making major strides.  The fuel-cell “stacks” used by Toyota, Honda and Hyundai – as well as others under development at General Motors and elsewhere – are smaller, lighter, more powerful and less costly than just a few years ago.

“We estimate a 95% cost reduction for the powertrain and fuel tanks of the vehicle we will launch in 2015 when you compare that to what it cost for us to build the original Highlander Fuel Cell in 2002,” said Toyota’s Carter.

While the maker isn’t saying what its cost-target will be, outside estimates have ranged from $50,000 to $100,000. The Japanese giant is facing pressure from rival Hyundai, however, which plans to be the first to market with the latest-generation hydrogen technology, launching a fuel-cell-powered version of its Tucson crossover later this year with a lease price of just $499 a month.

That will include all the fuel a customer might use – however, that remains the big rub.  There are but a handful of hydrogen filling stations in the entire country right now.  But California, where the industry sees the biggest near-term for the technology, is stepping up with a new funding package aimed at establishing at least 100 filling stations by decade’s end. About 40 are expected by 2016.

“Stay tuned, because this infrastructure thing is going to happen,” promised Carter, adding that it is not going to be necessary to have a hydrogen pump “on every corner.”

If anything, proponents are betting that if fuel-cell vehicles begin to sell the energy industry will see an opportunity and expand the availability of hydrogen – much as there’s beginning to be more availability for rapid-charging stations for plug-based battery vehicles.

(Sales of plug-based vehicles doubled in 2013. Click Here for the full story.)