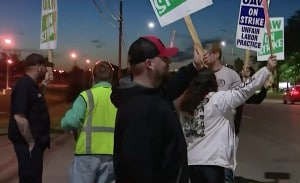 Workers at Faurecia's plant in Saline, Michigan, walked off their jobs just after midnight. A deal has been reached ending the walkout.

The United Auto Workers and the French supplier Faurecia have reached a tentative agreement that ended a brief walkout at a critical parts plant in Saline, Michigan.

Brian Rothenberg, UAW director of communications, confirmed that a tentative settlement had been reached Friday morning. Members of UAW Local 892 in Saline had set up picket lines around the plant at 12:05 a.m. Friday after negotiators failed to reach an agreement by the deadline set earlier by the union.

Details of the pending agreement were not released, pending a ratification meeting for the Faurecia employees. The dispute, over wages and benefits, had been simmering for several weeks while both sides worked to find a formula that could settle the dispute.

A longer walkout at the plant could have been damaging to companies such as Ford, which once owned and operated.

The Saline plant had been part of Ford’s components group but was sold a decade ago with the stipulation that the plant remain unionized. A number of workers in the plant are still paid at the old UAW wage scale but the majority of the workers are paid under a tiered system that was at the center of dispute over the new contract.

Working conditions were also an issue. One worker sent The Saline Post a video of rain falling through the roof into a massive puddle on the shop floor, which has portable toilets for workers because of bad plumbing.

Local 892 and UAW Region 1A officials told members in a memo dated Thursday that the company’s 2015 collective bargaining agreement had expired June 1. Region 1A Director Chuck Browning granted a three-week extension “in hopes of reaching an agreement we could all be proud of.”

(To see more about the federal investigation into the FCA/UAW training fund scandal, Click Here.)