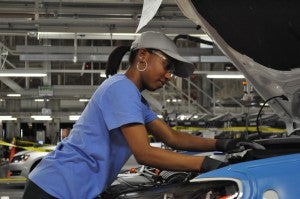 The union organizing effort was attacked by Tennessee’s Republican political establishment, which is opposed to the union gaining influence in the state and hampered by corruption charges flowing from ongoing federal corruption investigation. A former UAW vice president is facing sentencing soon after pleading guilty to criminal charges from the investigation.

In a statement, Frank Fischer, president and CEO of Volkswagen Chattanooga, who developed close ties to the Tennessee’s GOP establishment during a previous assignment at plan, said the employees have spoken. Fischer was returned to the plant last month after the organizing campaign began. 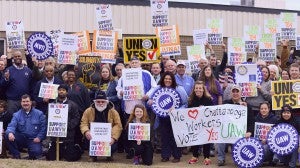 “Pending certification of the results by the National Labor Relations Board and a legal review of the election, Volkswagen will respect the decision of the majority,” said Fischer. “We look forward to continuing our close cooperation with elected officials and business leaders in Tennessee.”

The UAW called on Congress to take a comprehensive look at the country’s labor laws and NLRB rules that made it almost impossible for Volkswagen workers to form a union.

“VW workers endured a system where even when they voted, the company refused to bargain,” said Brian Rothenberg, spokesman for the UAW. “Clearly Volkswagen was able to delay bargaining with maintenance and ultimately this vote among all production and maintenance workers through legal games until they could undermine the vote.”

(Click Here for details about the VW workers in Tennessee voting for UAW representation.)

“Our labor laws are broken,” said Rothenberg. “Workers should not have to endure threats and intimidation in order to obtain the right to collectively bargain. The law doesn’t serve workers, it caters to clever lawyers who are able to manipulate the NLRB process.”

The UAW's third election in five years at VW's Chattanooga plant resulted in a union loss.

“The company ran a brutal campaign of fear and misinformation,” said Romero. Fear of the loss of the plant; fear of their participation in the union effort; fear through misinformation about the UAW; fear about current benefits in contract negotiations. During a period of nine weeks – an unprecedented length of time due to legal gamesmanship – Volkswagen was able to break the will of enough workers to destroy their majority.”

While political interference and right-wing group expenditures did contribute to the loss, Rothenberg said the current state of American labor laws particularly made the Volkswagen effort difficult.