Ford Takes a Loss in Fourth Quarter as Tough 2018 Closes 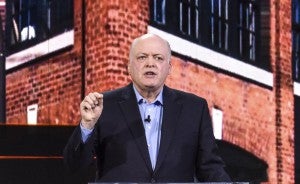 Ford Motor Co. posted a loss of $100 million or 3 cents per share in the fourth quarter despite a small increase in revenue while financial results for the full years showed the company’s profits were cut in half as it reported earnings of $3.7 billion for 2018 and lost more than $1.1 billion on its ventures in China.

Ford’s revenue increased from the previous year in both the fourth quarter and for the full year, Ford reported, while both net income and earnings before interest and taxes declined. At the same time, its cash flow, which turned negative during the second quarter, raised concerns among analysts as the company struggled through 2018.

Ford CEO Jim Hackett and CFO Bob Shanks tried to reassure analysts during a conference call, following the release of company’s 2018 Financial Report that the company was capable of financing its day-to-day operations, product plans and other initiatives and dividend out of its cash flow.

The concern about cash flow has prompted rating agencies such as Moody’s and Standard and Poor’s to take a close look at Ford operations and potentially could cost Ford its “investment grade” rating. Loss of investment grade would make Ford’s borrowing more expensive and force pension funds and other major investors to sell their holdings in Ford stock.

Hackett, however, insisted the concerns are over blown in light of Ford’s inherent strengths and steady improvement. “I feel over the last 18 months we have laid the foundation for the redesign of our business,” said Hackett, who noted the “fitness” regime he has imposed on the company has curbed increases in the operating costs. Increases in operating costs were negligible in 2018 and expected to be flat again in 2019, he said.

Jim Farley, Ford president for global markets, said Ford is responding to the issues it face is China, the world’s largest car market. The company will bring on 10 new products and is working closely with its Chinese supply base to localize the products in effort to bring down costs.

Ford’s North America delivered a positive fourth-quarter EBIT margin of 7.6% and a full-year margin of 7.9%. Ford Credit had strong results in the quarter and its best full year earnings before taxes in eight years.

The company posted solid results in North America even though the company’s product cycle was working against it. Nonetheless, the F-Series pick-up truck outsold its nearest competitor by the largest margin ever and its launching or will launch several new products, such as the Ranger pick-up, Explorer, Lincoln Aviator and Escape SUV over the next several months, Ford officials said.

Ford ended the year with cash and liquidity balances that were above its targets of $20 billion and $30 billion, respectively.

“We have consistently laid the foundation for the global redesign of our business, clearly investing to sharpen our competitiveness so we can better serve customers and invest for the future,” said Jim Hackett, Ford president and chief executive officer.

“Ford enters 2019 with a clear vision, a solid plan, and we are now in execution mode,” said Hackett, who has been criticized on Wall Street and by outside analysts for slow-walking its restructuring.

Ford automotive operations outside of North America generated an EBIT loss of $828 million in the fourth quarter, down $692 million, driven by China and Europe, Ford reported.

While auto operations reported a lower EBIT than a year ago, driven by difficulties China and Europe, all regions continued to focus on improving operational fitness while building on core company strengths.  In Europe, Ford posted record SUV sales, while Ranger was the region’s best -selling pickup and Ford once again was the best-selling commercial vehicle brand.

“While 2018 was a challenging year, we put in place key building blocks to build a more resilient and competitive business model that can thrive no matter the economic environment,” said Bob Shanks, Ford, CFO.

“We are confident in our plan to transform our business,” Shanks said the company balance sheet remains strong, with $23.1 billion of cash and $34.2 billion of liquidity,” Shanks added.

“2018 was a bit of a rebuilding year for Ford. The company was plagued by aging product during a year where it seemed like every other automaker was coming out with flashy new trucks and SUVs,” said Jeremy Acevedo, Edmunds manager of industry analysis.

“The future looks brighter for Ford in 2019, as the new Ranger and Explorer will likely generate needed excitement and sales. But the fact that Ford’s bread and butter F-150 is showing its age while key competitors are freshly redesigned could give the company some heartburn in the new year.”