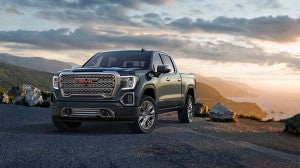 The GMC Sierra is one of the trucks GM is "considering" for electrification.

General Motors is “considering” options for adding an electric pickup to its line-up, a senior executive told TheDetroitBureau.com, a move that would see it join an expanding list of other manufacturers who are developing all-electric trucks.

How far along the project has gotten is unclear, but it appears to fit into the broader “path to an all-electric future” that GM CEO Mary Barra outlined last March. It would also allow the Detroit automaker to challenge its cross-town rival Ford which announced its own plans for a battery-electric pickup this month, as well as several upstart competitors, Tesla and Rivian.

“Certainly, it’s something we’re considering,” Duncan Aldred, the vice president of the GMC brand, said during an interview in San Diego, where the “professional grade” brand was previewing several new products this week, including the off-road AT4 version of the big GMC Sierra pickup.

GM previously offered a hybrid version of both the Sierra and the Chevrolet brand’s own full-size model, the Silverado, but sales were limited and the trucks were scrapped after only a couple years. Meanwhile, Fiat Chrysler Automobiles launched its own electrified pickup, a “mild” hybrid version of the Ram 1500, for the 2019 model-year. 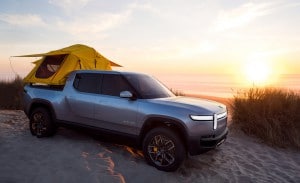 But GM is looking at going full-out, several sources confirmed, with a fully electric pickup design, according to David Cole, director-emeritus of the Center for Automotive Research in Ann Arbor, Michigan.

“They wouldn’t be saying this if they weren’t really confident about doing it,” Cole said, noting that GM is increasingly serious about shifting to electric propulsion across the board. After a recent tour of the automaker’s battery lab, Cole said, he is convinced “they are moving beyond hybrids…andwant to be at the forefront of battery-electric technology.”

The automaker gave a hint of what is in the works during a media event ahead of the North American International Auto Show earlier this month, revealing several renderings of an all-new Cadillac SUV that will be the company’s first model to make use of an entirely new, all-electric architecture.

The flexible platform can be modified for both smaller and larger vehicles, GM engineers explained during that preview. They declined to say if it would cover enough of a range of products to also cover full-size trucks, however. If not, however, that would require the company to develop an entirely different platform, something that could push into the hundreds of millions of dollars.

(Waymo plans to outfit cars with its self-driving tech in MI plant. Click Here for the latest.) 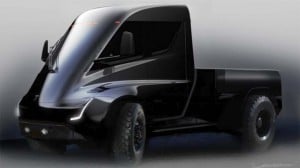 A rendering shows the Tesla pickup.

What’s clear is that an electric pickup would not follow the past approach, stuffing batteries into every possible nook and cranny, in the process restricting passenger and cargo space. The new industry approach is to go with a “skateboard” design that mounts batteries, motors and electronics belo the vehicle’s floorboard. That not only preserves existing space but actually opens up opportunities to use areas normally claimed for traditional gas and diesel powertrains.

Rivian demonstrated that potential during the debut of its R1T electric pickup at the Los Angeles Auto Show in November. Instead of an engine, it boasted plenty of storage space under the hood. And with no driveline linking the engine and back wheels, it added a compartment under the cargo bed that could provide concealed additional storage.arley

Rivian hopes to bring the R1T to market in a couple of years, about the same time that Tesla has signaled it could launch a production version of its own electric pickup previewed in 2017.

Going electric could offer several other advantages, including a lower center of gravity to improve handling, as well as the added, stump-pulling, off-the-line torque of electric motors. 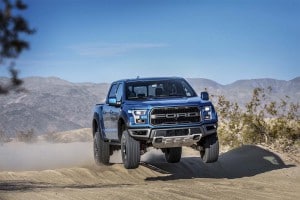 Ford has confirmed plans to offer an electrified version of the F-150 pickup.

The R1T, for example, is expected to make “close to 800 horsepower,” said Rivian CEO R.C. Scaringe, during an L.A. news conference. He also said the R1T will be able to hit 60 in 3 seconds and tow up to 11,000 pounds. That would make the Rivian the world’s fastest pickup and give it towing capacity equal to some of the beefiest versions of the Ford F-150, GMC Sierra 1500 and Chevrolet Silverado 1500 now on the road.

There are drawbacks, including the high cost of batteries, though a newly released study by consulting firm Deloitte predicts a sharp decline over the next several years. CAR’s Cole believes GM itself is targeting a figure of under $100 per kilowatt-hour, down from the $145 per kWh when the automaker launched its all-electric Chevrolet Bolt EV a few years ago.

(Study says EVs to cost same as gas models by 2022. Click Here for the full report.)

Considering the Rivian R1T will need 180 kWh to deliver 400 range, a price cut like that would be substantial if GM had similar range aspirations.

With new entrants like Rivian and Tesla entering the huge but hotly competitive pickup market, it’s clear traditional truck makers are feeling pressure. Earlier this month, Jim Farley, Ford’s president of global operations, announced that his company would also have an all-electric truck coming. So far, however, the automaker has not offered details, including the timing of that full-size model’s launch.