EVs Expected to Cost Same as Gas-Powered Cars by 2022

The Chevy Bolt will be joined by two dozen other GM battery-electric vehicles by 2023. GM is all in with its EV strategy.

Automakers are set to overcome one of the biggest obstacles – cost – to selling electric vehicles in large numbers by 2022, according to a new study by research firm Deloitte.

The firm believes that EVs will achieve cost parity with gasoline- and diesel-powered vehicles globally by 2022 – first happening in the UK by 2021 – allowing for an influx of 21 million EVs to be sold within a decade.

Part of that is the growth in charging networks around the world, which has been funded, in part, by the automakers themselves. Tesla led the charge in this arena setting up supercharging stations in the U.S. and around the world where their vehicles are sold.

However, Volkswagen is deep into that effort as well. Most of its efforts stem as makegood efforts related to its diesel emissions scandal from 2015. It’s also in the German automaker’s best interest as it pledges to have 50 different EVs in its line-up by 2030.

Deloitte’s research reflects the increase of charging stations, i.e. elimination of range anxiety, will accelerate the pace of global EV adoption. The firm believes it will rise from 2 million units in 2018 – a new record – to 4 million in 2020, 12 million in 2025, before rising to 21 million in 2030. By 2030, Battery Electric Vehicles (BEVs) will significantly outperform the rest of the EV market, accounting for 70% of total EV sales. 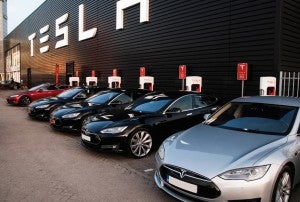 Finding places for the superchargers for Tesla's fleet isn't too difficult. The car will find a charging station for the driver.

“In the UK, the cost of petrol and diesel vehicle ownership will converge with electric over the next five years. Supported by existing government subsidies and technology advances, this tipping point could be reached as early as 2021. From this point, cost will no longer be a barrier to purchase, and owning an EV will become a realistic, viable option for new buyers.”

Making the EV “viable” has been the tricky part of the equation. Battery costs have come down significantly in recent years – tenfold in fact, but the least expensive current EVs are still too pricey for most buyers.

For example, Tesla’s mainstream sedan, the Model 3, is supposed to be the brand’s “people’s car,” if you will. The entry-level model is supposed to start at about $35,000. However, that car is not currently available as Tesla can’t make a profit selling that one. You can get a Model 3, but the starting point is closer to $45,000 with the top end nearing $60K — again too much for the average buyer. 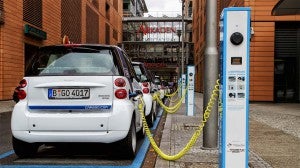 The Norwegian government offers a number of incentives to promote EVs, including subsidized charging.

Deloitte sees the influx of new vehicles from other automakers helping to resolve that problem. In fact, various estimates show there could be as many as 100 electric vehicles available to the general public by 2020.

Growing demand for greener vehicles has seen the majority of OEMs announce their ambitions in the EV market and the emergence of a number of new entrants to the automotive market. However, Deloitte’s research suggest that the number of manufacturers is unsustainable.

“Whilst there is a distinct trend developing in the EV market, the story is not a clear cut one. As manufacturers increase their capacity, our projections suggest that supply will vastly outweigh consumer demand by approximately 14 million units over the next decade,” Woodward said.

“This gearing up of EV production is driving a wide ‘expectation gap’ and manufacturers, both incumbent and new entrants alike, will need to adapt towards this new competitive landscape.

“Those that can successfully build trust in their brand, ensure a positive customer experience from initial sale through to aftercare, and reflect consumer shifts towards the sharing economy in future business models will successfully navigate this. Equally, continual investment in engineering talent and the formation of partnerships with bespoke battery producers and third-party mechanic networks will also be important.”