Four of Tesla's top executives have departed the company during the last four to six weeks.

Tesla’s been hit by wave after wave of difficult news, situations and investigations, apparently causing some executives to rethink the viability of the company.

Liam O’Connor, Tesla’s vice president of global supply management, is the latest of a group of executives to depart the company. He joined Tesla in 2015 after a four-year run with Apple, Bloomberg reports an unnamed insider said O’Connor is leaving the company within the next several weeks.

His departure marks at least the fourth executive to leave California-based EV maker within the last month. Justin McAnear, vice president of worldwide finance and operation; Gabrielle Toledano, human resources chief; and Dave Morton, chief accounting officer, have also put in their notices. In all, more than 40 executives have reportedly left Tesla in 2018 alone, the news service reports.

Tesla’s always been a bit of a merry-go-round when it came to senior executives. However, the recent issues at the company may have given these former Tesla executives and dozens of others reason to explore jobs with at least the appearance of more stability.

By all accounts, Musk can be a difficult taskmaster as well as the source of much of the current upset at the company. Musk and Tesla are facing a criminal investigation by the U.S. Justice Department looking into his brief flirtation with taking the California carmaker private, even as the U.S. Securities and Exchange Commission is investigating that aborted move. 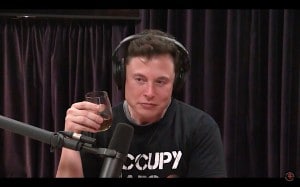 Musk enjoyed a small glass of whiskey while talking to Joe Rogan about a variety of topics.

On top of the legal problems stemming from Musk’s August privatization tweet, Tesla has a variety of other legal challenges. Musk is facing lawsuits in both Los Angeles and London filed by a British diver who the South African-born executive has accused of being a “pedo,” or pedophile, as well as a “child rapist.”

It recently sued a former worker at its Gigafactory battery plant in federal court, accusing him of sabotage. In turn, that employee has countersued, positioning himself as a whistleblower revealing safety concerns and other problems.

Another federal probe is looking into whether Tesla fired nearly 1,000 workers at its Fremont, California assembly plant in 2016 to short-circuit a unionization drive. Finally, Musk’s behavior in recent months from the “peso” comment to smoking pot on a podcast to boorish behavior on earnings calls, haven’t endeared him to anyone.

Unionization efforts and other labor strife aside, the company has struggled getting what is widely viewed as its mainstream car, the Model 3, up to full manufacturing speed. Initially, Musk described making the Model 3 as “production hell.”

The company continually missed deadlines causing observers to wonder if Musk could work his way through the problem, if the company had enough funding to do so and would it last long enough to meet the order book of more than 400,000 vehicles.

Ultimately, Musk discovered the problem was too much automation, added another line (under a tent) and go production levels up to 5,000 units per week midsummer, with promises of hitting the 10,000-unit mark by the end of the year.

All of this might be water under the bridge, if the brand’s vaunted Autopilot wasn’t constantly at the center of controversy. The oft-criticized semi-autonomous technology has been blamed for several crashes, including three deaths and a dozen injuries. Victims and families have claimed the system failed to operate correctly while in nearly every instance, Tesla has shifted blame to the driver for a variety of reasons. Safety advocates are pushing for the company to rename the feature – at a minimum – and instead Musk has doubled down saying that his vehicles will have Level 5 autonomy capability by the end of this year.

(Careful what you ask for: Musk sued by diver he disparaged. Click Here for the story.)

In the meantime, the company’s stock price has tumbled 4.2% through yesterday. However, it has hit a few high notes in recent weeks. The aforementioned Model 3, despite its production foibles, is the best-selling electric vehicle in the country and it received a five-start crash rating from the National Highway Traffic Safety Administration. Additionally, the company struck a deal with Ganfeng Lithium Co. in China to supply about 20% of the company’s lithium until 2020.