Careful What You Ask For: Musk Sued by Diver He Disparaged

Tesla CEO wondered why he hadn't been sued yet.

After pushing for lawsuit from diver Vern Unsworth, Tesla CEO Elon Musk got what he wanted – in London and Los Angeles.

Adding to the many headaches facing Elon Musk, the Tesla CEO has now been sued by a British diver that he has accused of being a pedophile.

In July, the 47-year-old executive got into a Twitter war with Vernon Unsworth earlier this year when Musk offered to send a mini-sub to help rescue members of a youth soccer team trapped in a flooded Thai cave. Unsworth derided it as a publicity stunt and suggested Musk shove the sub where the sun doesn’t shine.

Musk responded by declaring Unsworth “pedo guy,” slang for a pedophile. “Sorry pedo guy, you really did ask for it,” Musk tweeted to his 22.5 million followers. He followd it up adding, “Bet ya a signed dollar it’s true.” Musk also declared that, “I fucking hope he sues me.”

While Musk subsequently apologized, he apparently couldn’t let go of the tiff, responding to a tweet from one of his followers by questions why Unsworth hadn’t yet sued him. “You don’t think it’s strange he hasn’t sued me?” Musk said in a late August tweet. “He was offered free legal services.”

(Musk lights up – but Tesla shareholders are turned off. Click Here for the story.)

As if to make sure that would happen, Musk amped up his attack, declaring the diver a “child rapist.” 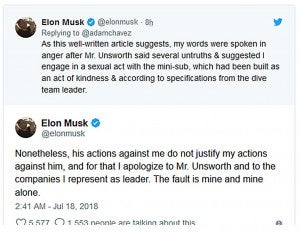 Musk's use of social media has begun to raise concerns, such as when he had to apologize to a driver involved in the rescue of kids caught in a flooded Thai cave.

In an e-mail sent to BuzzFeed, he went further, saying of Unsworth, “He’s an old, single white guy from England who’s been traveling or living in Thailand for 30 to 40 years,” adding that the diver went to Thailand “for a child bride who was about 12 years old at the time.”

Unsworth is now doing precisely what Musk asked for. He has filed legal actions in both London – where libel laws are relatively easy to pursue, as well as in a federal court in Los Angeles where he is seeking at least $75,000 in damages and a court order barring Musk from making further comments.

“Elon Musk falsely accused Vern Unsworth of being guilty of heinous crimes,” the Brit’s lawyer, L. Lin Wood said in a statement. “Musk’s influence and wealth cannot convert his lies into truth or protect him from accountability for his wrongdoing in a court of law.”

In the 65 pages of paperwork filed in Los Angeles, the suit charges that Musk attempted to destroy Unsworth’s reputation “by publishing false and heinous accusations of criminality against him to the public.”

Among other things, the L.A. lawsuit declares, “Mr. Unsworth is not a pedophile (and) has never engaged in an act of pedophilia. Mr. Unsworth is not a child rapist,” it added, pointing out that his “significant other” is a 40-year-old woman with whom he shares a home in Thailand.

(Click Here for more about Musk lamenting the “excruciating” pressures at Tesla.)

Unsworth, it notes, was a regular visitor to that country where he explored and mapped cave. He came to prominence earlier this year when the youth soccer team fled into a cave to avoid a storm, only to find the exits flooded. Unsworth was part of a rescue team that eventually led all of the team members to safety – though one diver died in the process.

After apologizing for calling Unsworth a pedophile, Musk couldn't help but play with fire, suggesting again the diver was a pedophile because he hadn't sued him — yet.

Musk offered to send a mini-sub to help get them out, though members of the team said it would not work in the conditions they found. Unsworth derided the offer as a publicity stunt as told Musk to shove the sub into his lower anatomy as their war of words escalated.

Unsworth did not participate in the final rescue dives because he didn’t have enough experience, but did help in the planning of the mission.

The lawsuit adds another chapter to what some critics have seen as a meltdown by Musk in recent months. Among other things, he told a reporter for the New York Times that the last year has been “excruciating,” and predicted “the worst is yet to come.”

He may be right, at least from a legal standpoint. Musk is personally facing an investigation by the SEC looking into his brief attempt to take Tesla private. The automaker is also a target.

Tesla is also locked in a legal battle with a former employee it accuses of being a saboteur but who has positioned himself as a whistleblower.