Nissan has made a heavy investment - and numerous changes -- aiming to increase the appeal of its sixth-gen 2019 Altima sedan.

While some automakers are paring back, and even dropping out, of the sedan market, Nissan is betting big with the launch of the sixth-generation Altima that will roll into U.S. showrooms in the coming month.

While the automaker isn’t revealing precisely what it spent, Bruce Pillard, the marketing manager for the 2019 Altima, said the new version of the midsize sedan marks “one of the highest investments in the history of Nissan.” That includes an entirely new platform, the first-ever all-wheel-drive system for the Altima, and the Nissan brand’s first use of the breakthrough VC-Turbo engine. That’s in sharp contract with rival Ford Motor Co., which is set to phase out its own midsize sedan, the Fusion, along with the rest of its U.S. four-door line-up.

“The future is bright” for sedans, Pillard declared, ahead of a media drive of the 2019 Nissan Altima in Santa Barbara this week, countering what has become conventional wisdom that sedans are all but doomed as motorists by the millions migrate to SUVs and CUVs.

“The market is still here and still relevant in terms of volume,” he added during a subsequent conversation with TheDetroitBureau.com, noting that Nissan didn’t make such a big investment expecting to see Altima sales continue to slide.

(The Ford Fusion is dead — for now anyway. Click Here for the story.) 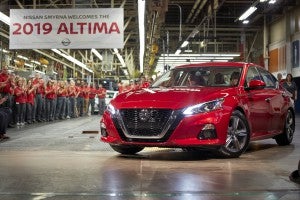 Nissan is confident enough about Altima that it will continue producing it at two plants: in Canton, Miss., and here, in Smyrna, Tenn.

Nissan’s optimism stands in sharp contrast what many of its competitors are thinking. And it certainly reflects the fact that Altima has been one of the dominant players in the still substantial midsize segment, lagging behind only the Honda Accord and Toyota Camry.

“It’s a position worth fighting for, even if it’s a smaller market than it used to be,” said Stephanie Brinley, a senior automotive analyst with IHS Automotive.

Passenger cars have been taking massive hits in recent years, sales of sedans, coupes, sports cars and convertibles collectively tumbling 11% in 2017, compared with the overall motor vehicle market’s 2% decline. Where midsize sedans alone once accounted for a good third of the American market, all forms of four-door models – from subcompacts to full-size –  slid to just 25% of demand through the first seven months of this year, according to IHS data. Meanwhile, utility vehicles have grown from a small niche in the 1990s to account for 45% of all U.S. new vehicle sales during the same period.

Nissan certainly hasn’t ignored that market trend. It was an early player in the launch of car-based crossover-utility vehicles, with models like the Murano and Rogue. It added a new base model, the Kicks this year, targeting what many see as the big growth opportunity over the next several years.

But Nissan’s market research, said Pillard, indicates there could be new opportunities to bring buyers back into the sedan segment. 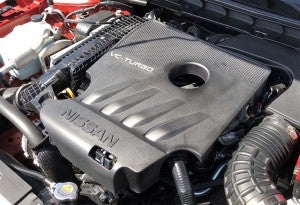 The optional VC-Turbo is meant to amp up the 2019 Altima's fun-to-drive quotient.

“We think younger generations will buy more sedans than older generations,” he said in Santa Barbara. Conversations with Gen-Y and, in particular, Gen-Z cohorts found many saying, “I don’t want to drive daddy’s car,” according to Pillard.

That would be in sync with the sort of generational moves the industry has seen over the decades. The station wagons that dominated suburban driving back when Baby Boomers were young fell out of popularity as parents of Gen-Xers migrated to minivans. But that body style now accounts for barely a third of its former peak in demand, as crossovers and more traditional sport-utility vehicles have become today’s family haulers of choice.

SUVs and CUVs have gone beyond any emerging niche that the industry has seen, however, leading many observers to conclude the utility vehicle boom is not a transitory fad.

For her part, analyst Brinley doesn’t see utes going away. They simply offer too much functionality for parents and many other buyers. On the other hand, where many households used to have two sedans, demand could level off once motorists add one SUV into the fleet, she suggested.

“In terms of family haulers, utility vehicles just offer the type of packaging families want, and I don’t see families giving that up. That said, I don’t see sedans going the way of the dodo bird,” Brinley added, especially if the strategy behind the 2019 Nissan Altima is any example. 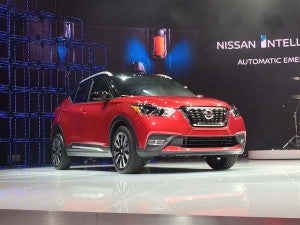 Nissan is covering all bases by also expanding its CUV line-up with models like the new Kicks.

The Japanese automaker put much more emphasis on styling, tech features and performance, explained Pillard, betting that there’s still a sizable market for vehicles that offer the sort of fun-to-drive characteristics that SUVs generally don’t deliver. Utes also tend to look alike, echoed Brinley, while sedans give designers room to get creative.

“I don’t want to comment (about Ford’s strategy) but if some Fusion owners want to buy an Altima I would have no problem with that,” Pillard added.

The sixth-generation Altima, meanwhile, is the first Nissan sedan to offer all-wheel-drive, something the carmaker hopes will take away one of the key reasons why many buyers, especially in Snowbelt regions, say justified their switch to a utility vehicle.

Utes still have plenty of other appealing factors that simply can’t be matched by a sedan, starting with the high seating position that women buyers list high as a reason to buy.

Most analysts anticipate the shift from sedans and coupes to SUVs and CUVs will continue, though the pace also is expected to slow, now that so many buyers already have crossed over to the light truck side – which includes pickups and other alternatives. There’s also a general expectation that more automakers will trim back their passenger car offerings. Fiat Chrysler, for one, dropped the Dodge Dart and Chrysler 200 models, its only remaining models being the Dodge Challenger and Charger muscle cars.

Nissan is positioning itself to take advantage wherever the market goes, but it clearly put the money into the new Altima with fingers crossed, hoping that it really has found a formula that can shore up, and even help rebuild, demand for its sedans.