Renault-Nissan-Mitsubishi Alliance Teaming Up With Google 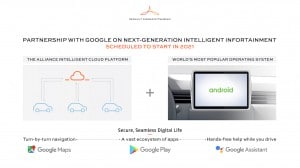 The Renault-Nissan-Mitsubishi Alliance inked a deal with Google to put its intelligent infotainment system in its vehicles.

The Renault-Nissan-Mitsubishi Alliance has a new partner, tech giant Google signing on the develop the automotive group’s next-generation infotainment system.

It’s a significant move by Google, though not its first time developing technology for automobiles. Like rival Apple’s CarPlay, its Android Auto system is now being offered by an array of automakers and allows a motorist to access a wide range of smartphone apps on a car’s touchscreen system.

“Under the technology partnership, vehicles sold by the Alliance members in many markets will utilize Android, the world’s most popular operating system, and will provide turn-by-turn navigation with Google Maps,” the Alliance said in a statement.

The new infotainment system Google plans to develop will also let motorists “access … a rich ecosystem of automotive apps on the Google Play Store and have the ability to answer calls and texts, control media, find information and manage vehicle functions with voice using the built in Google Assistant.”

The partnership with Google isn’t a major surprise to tech and automotive observers. The Silicon Valley tech company already provides the operating system used by 80% of the world’s smartphones. 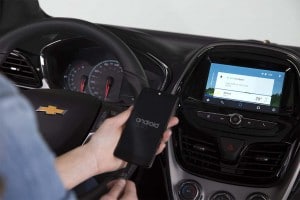 While Android Auto is available on several vehicle brands, this new deal with the Alliance puts Android atop the automotive infotainment heap.

By partnering with the Alliance, however, Google instantly becomes a major player in the auto industry. Between them, Renault, Nissan and Mitsubishi sold 10.6 million vehicles worldwide in 2017, the group claiming to have topped rivals Volkswagen and Toyota. The plan is to boost global sales to 14 million by 2022.

Automotive manufacturers are spending billions of dollars upgrading their infotainment technologies, which are seen as a major draw, especially for tech-savvy Gen-X and millennial buyers.

Microsoft was one of the first tech giants to enter the field, working with Ford to develop its original Sync infotainment system. That system experienced a number of problems, however, resulting in numerous owner complaints. For its latest version, Sync 3, Ford switched partners and is now working with Canadian-based Blackberry Limited.

(Click Here for more about Toyota connecting with Alexa.)

Other tech firms are looking to find a place on the instrument panel, however. Amazon has formed alliances with a number of carmakers, including Ford. Vehicles equipped with the latest version of Sync now can access the Alexa voice assistant to do things like control home automation systems and even order a pizza from Domino’s. 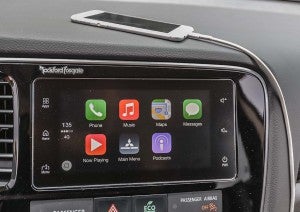 A prototype of the Mitsubishi CarPlay screen. The production unit will have more knobs.

Amazon also announced Monday night that it would partner with Audi to sell and install charging systems for the German maker’s new e-tron battery-electric SUV.

The next big wave will see the introduction of voice assistant systems, such as Amazon’s Alexa.

At the Consumer Electronics Show last January, Mercedes-Benz unveiled a new “user experience,” dubbed MBUX, which will let drivers converse with the system in natural speech. BMW last month introduced a similar system of its own.