VW Charged Up About EV Racer Heading to Pikes Peak

“It’s about time we settled the score.” 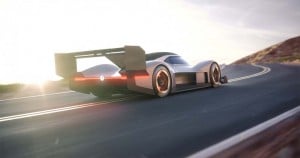 VW hopes to leave the competition in the dust when it takes the I.D. R up Pikes Peak.

Volkswagen has put in an order for a whopping $25 billion worth of lithium-ion batteries and related technology, as we reported last week. A small share of that will be going into its new electric motorsports program which is charged up and ready to challenge Pikes Peak a few months from now.

These pics preview the new I.D. R electric race car that VW plans to use as its first entry into the grueling Pikes Peak International Hill Climb since 1987. I.D. is the new sub-brand the German automaker will begin rolling out late in the decade, with a total of 20 full-electric models due out by 2025, so it’s no surprise the hill climb car will share that badge.

“We want to be at the forefront of electro-mobility with Volkswagen and the I.D. family,” said Frank Welsch, the Volkswagen board member overseeing its electrification efforts. “Competing in the most famous hill climb in the world with the I.D. R Pikes Peak is a valuable test for the general development of electric cars.”

VW is, in fact, just the latest automaker to go electric on Pikes Peak, the battery class seeing brands like as Nissan and Mitsubishi mount challenges over the last several years. And the competition has been growing more intense since Rhys Millen delivered a historic win in June 2015 behind the wheel of the Latvian-made Drive eO PP03. That marked the first time an EV defeated all of its internal combustion challengers. 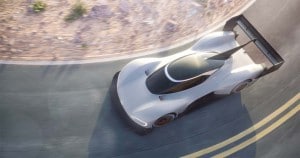 VW isn't saying much about the I.D. R except to note it's electric and has four-wheel-drive.

There are a growing number of opportunities for those who want to race electric, notably including the Formula E series. Now, battery-cars of all sorts do have their challenges – Formula E drivers, for example, have to stop, mid-race, and swap cars because of range limitations. But there are some notable advantages, as well.

And perhaps nothing highlights that more than the Pikes Peak International Hill Climb which is scheduled for June 24th this year. Drivers not only have to manage a serpentine 12.4-mile course but they also climb from the starting line at 9,000 feet to the summit, at 14,115 feet. Such altitudes severely strain the capabilities of naturally aspirated engines. But battery drive systems are unaffected by altitude – and, unlike turbocharged powertrains, they don’t suffer from lag coming out of the many corners heading up the hill.

While the Pikes Peak run will be a test of Volkswagen’s electric drive technology that, in turn, could help give the automaker’s electrification program some real credibility.

“The I.D. R project represents a fantastic opportunity for Volkswagen to change the conversation about e-mobility, both emotionally and from a sporting perspective,” said Jürgen Stackmann, the VW Board Member for Sales, Marketing and After Sales. 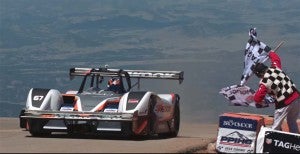 So, VW driver Romain Dumas will be under some serious pressure when he heads to Colorado three months from now. The automaker hasn’t made the climb since 1987, back then relying on a dual-engine Golf making a solid 652 horsepower. But the run didn’t go as planned and Sven Smeets, VW’s Motorsports Director says, “It is about time we settled the score” this year.

Raising the bar is the fact that New Zealand’s Millen returned to Pikes Peak in 2016 and set the current record in the electric prototype class, at 8:57.118. His Drive eO PP03 produced more than a megawatt of power – 1,596 horsepower in more traditional terms.

For its part, VW isn’t saying much about the I.D. R beyond noting it has all-wheel-drive – likely by mounting multiple motors on the front and rear axles. We do know that the various I.D. concepts, like the Crozz, Vizzion and Buzz, make from 302 to 369 horsepower that way. So, it seems highly likely that the I.D. R won’t be using stock production components.

(McLaren’s new hypercar will be a hybrid. Click Here for a sneak peek at the McLaren BP23.)