Codenamed BP23, it promises to best the iconic McLaren F1. 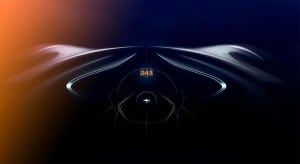 A rendering of the McLaren BP23 hypercar instrument cluster shows it hitting 243 mph, the top speed of the legendary McLaren F1.

Just days after McLaren revealed the latest of its extreme machines, the Senna GTR, the British marque is teasing us with renderings of what it promises will be the fastest car it has ever built.

The as yet-unnamed “Hyper-GT’ will be capable, it says, of “exceeding 243 mph” which, it turns out, was the max speed of the iconic McLaren F1. Like that original, 1994 hypercar, the new model will also feature a centrally mounted seating position, with an additional passenger seat on either side.

Codenamed the BP23, McLaren says the new model will be powered by a “petrol-electric hybrid powertrain.” Beyond that, details are scarce when it comes to the powertrain, but few would be surprised if the new hypercar would make 1,000 horsepower or more and be able to push somewhere in excess of 250 mph.

This won’t be McLaren’s first hybrid, by the way. The P1 of 2014, the more or less spiritual successor to the F1 – minus the center-mounted seat – combined an AC permanent magnet synchronous electric motor with a twin-turbo 3.8-liter V-8. The gas side of the equation made 727 horsepower and 531 pound-feet of torque pushed through a 7-speed dual clutch gearbox, the electric side 177 hp and 96 lb-ft. Accounting for a rounding error, the combined package made 903 horsepower – and could nip 60 in 2.7 seconds, with a top speed of 217 mph.

(McLaren captures most beautiful car in the world prize. Click Here for the story.)

An overhead rendering of the McLaren BP23 hypercar.

To some, that meant the P1 didn’t truly live up to what a McLaren flagship should deliver. By besting the old F’s top speed, the BP23 should make such folks breathe easy, at least if they’ve got a big enough checkbook. The P1 cost $1.15 million when it debuted nearly five years ago and the new hypercar will tack on a sizable premium to that, coming in at £1.6million before taxes – $2.2 million at the current exchange rate.

One reason will be exclusivity. McLaren says that only 106 of the new models will be produced — one less than the production run for the old F1. The other reason? There seems to be a huge market for hypercars buoying everyone from Ferrari to Croatia’s Rimac. And McLaren advises us that it’s actually already sold out the entire BP23 production run. Whether that means everyone in the order bank will take delivery is another matter. It’s common to find speculators who plunk down a deposit expecting to sell their spot to someone for a hefty fee.

What we do know is that production is scheduled to begin at the end of 2019, though McLaren Automotive CEO Mike Flewitt revealed during a news conference at the Geneva Motor Show this week that there will be a public unveiling sometime later this year. The Paris Motor Show, next September, might be a good candidate. 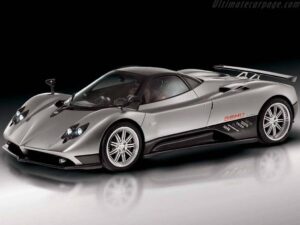 Which leaves one other mystery to be solved: what precisely will McLaren name its new flagship?

“BP23 will carry an as-yet unannounced name, rather than the alphanumerical nomenclatures used (for) the McLaren Sports Series and Super Series,” the carmaker says. “This name, together with the maximum possible speed, will be disclosed nearer to the car’s reveal.”

Incidentally, while the 1990s-era F1 was, for a while, the world’s fastest production car, the BP23 won’t come close to that record — unless McLaren has a big surprise in store. Right now, a number of manufacturers, including Bugatti, are chasing that crown, but American exotic manufacturer Hennessey is planning to go for a record run in the near future, targeting something in excess of 300 mph.