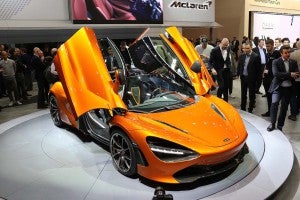 The Geneva Motor Show would not be complete without a new model from McLaren. This year is no different as the oft-predicted-near-death British carmaker continues to show it’s got plenty of life left with the all-new 720S.

The new model is the second-generation in the company’s “super series” vehicles putting 720 horsepower from its 4.0-liter twin-turbo V8. The new super car covers 0 to 60 mph in just 2.8 seconds and will hit 124 mph in 7.8 seconds.

The new beast has a top speed of 212 mph, according to McLaren officials. The new 720S is lighter than its predecessor, the 650S, courtesy of the liberal use of lightweight materials — oodles of carbon fiber and aluminum — and this adds to the stunning performance of the new entry.

“Super Series is the core of the McLaren business and personifies the blend of extreme performance, crafted luxury and unparalleled driver involvement that is the McLaren heartland,” said Mike Flewitt, Chief Executive Officer, McLaren Automotive.

(Audi RS 5 Coupe sates the need for speed. Click Here for the story.)

“This is the first time we have replaced a product family and the new 720S is absolutely true to McLaren’s pioneering spirit in being a revolutionary leap forwards, both for our brand and the supercar segment.” 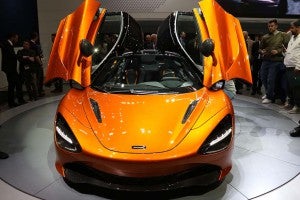 One of the key points in the design of the new Super Series is the absence of radiator intakes on the side of the car; this function is carried out instead by the unique “double-skin” aerodynamic form of the dihedral doors, which channel air to the high-temperature radiators that cool the mid-mounted engine.

(Click Here for details about Ferrari’s new 812 Superfast in Geneva.)

The 720S features the new generation of McLaren’s Proactive Chassis Control, new suspension and power-assisted, electro-hydraulic steering. These features combine to deliver huge reserves of grip, balance and performance and an unmatched breadth of dynamic capabilities, the maker notes.

The interior is not only bigger, it features plenty of luxury appointments that remind you, it is a super car. Leather and machined aluminum abounds, but is complemented by the revolutionary new McLaren Driver Interface, which comprises a Folding Driver Display and Central Infotainment Screen.

In combination with a cabin environment that establishes new standards in the supercar segment for visibility, space and comfort. The new coupe comes in three trim levels: standard, performance and luxury.

(To see how Infiniti is taking F1 to the streets, Click Here.)

Buyers can scurry down to the nearest McLaren dealer and place an order.  First orders in can expect to get a hand-built masterpiece sometime in May. Don’t forget that check book. Prices for the new 720S start at £208,600, or nearly $255,000.