LeEco CEO Defies China’s Order to Return, Stays in US

Jia Yueting stays put to complete $1B in fund raising for Faraday Future. 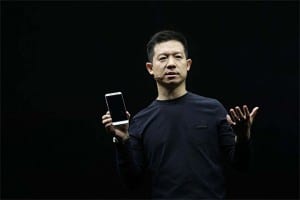 Chinese billionaire Jia Yueting has money riding on both LeEco and Faraday Future.

Jia Yueting, CEO of Faraday Future, defied orders to return to China and meet with federal regulators there concerning the company’s debt, deciding instead that the company’s financial future was here and now in the U.S. raising funds for the beleaguered start-up automaker.

The China Securities Regulatory Commission ordering Jia Yueting to return to China to address mounting debt from LeEco – he’s the CEO – to protect investors’ rights. Instead Yueting sent his younger brother, Jia Yueming, to meet with the government officials, explaining he needed to remain in the U.S. to wrap up deals to secure the $1 billion in funding that Faraday needs.

“I am deeply sorry and blame myself for the negative impact of LeEco’s debt crisis,” he said in the statement that was posted on his official WeChat account, according to Reuters.

“The fundraising for Faraday Future in the United States is making significant progress and there are many tasks I need to push forward in order to ensure the production and timely delivery of the FF91,” he said.

The FF91 is the luxury electric vehicle (EV) that LeEco is developing with Fraday Future. It too is the subject of much speculation. Faraday Future pulled out of a venture in November to build a new plant in Nevada to build the car, instead selecting an old Pirelli tire plant in California to convert to its EV plant.

The Faraday project has been riddled with questions and doubts for some time, most of them related to cash flow issues. Jia Yueting was brought on from LeEco to tackle the CEO’s post and bring the new vehicle to the market.

In addition to the problems with its own vehicles, Faraday also decided to pull out of a joint project with British sports carmaker Aston Martin to develop the RapidE electric car.

(Click Here for details about Faraday cutting and running on its unfinished Nevada plant.)

In December, Jia was placed on a Chinese debtor blacklist, but also took over as CEO of Faraday and claimed he had raised $1 billion for the automaker. Faraday has relied primarily on funding from Jia and LeEco, which itself has run short on cash. LeEco’s instability has created questions about whether Faraday can actually get the FF91 into production as well as the prompting Jia Yueting’s recall to China, Reuters reported.

Faraday has had something of a roller-coaster existence since it went public in 2015. It has made some headline-grabbing moves with the debut of an early prototype and, at the Consumer Electronics Show last January, the debut of the FF91, slated to be its first production model.

In late 2015, it said it would invest $1 billion in a plant on the outskirts of Las Vegas, but within months of breaking ground it became apparent the company was facing serious financial challenges.

Dag Reckhorn, vice president of Global Manufacturing, said the move is a “demonstration of our commitment to getting FF91 on the road by the end of 2018,” the original target date. Faraday said it expects to employ as many as 1,500 U.S. workers once the FF91 is up and running. It is expected to use as much as 800,000 square feet of the 1 million square-foot facility.