Project scales back – but other EV models, including version of DBX ute, likely to follow.

Aston Martin plans to have the RapidE battery-car in production in 2019, but in low volumes.

Aston Martin has released renderings of its first fully electric vehicle, the RapidE, a battery-based version of its four-door Rapide sports sedan.

But the British maker is also confirming that it is scaling back the program, which was aimed at producing a competitor to the likes of high-end versions of the Tesla Model S. Splitting from its Chinese-owned partner, LeEco, Aston now plans a “limited run” of just 155 RapidE battery-cars.

The break-up was first reported by the Reuters news service, quoting Aston CEO Andy Palmer. A well-placed source confirmed that report for TheDetroitBureau.com, but also noted that, if anything, Aston has plans to keep pushing into the battery-car space with additional models, starting with a version of the upcoming DBX sport-utility vehicle.

“We are no longer working with LeEco on any projects; the partnership reached a natural conclusion after completion of the concept work,” the insider explained. “Accordingly we’ve adjusted our plan slightly for the first (certainly not last) Aston EV.” 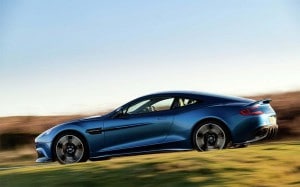 Aston is by no means the only luxury maker thinking electric. With increasingly tough emissions and mileage standards falling into place worldwide high-line manufacturers need to go green or risk being locked out of key markets – such as China, the world’s largest battery-car market, which is specifically pushing for EVs.

Aston says it will have the RapidE on sale sometime in 2019. That would be barely four years after the concept version was first unveiled at the 2015 Geneva Motor Show, the automaker noted.

Development was a joint effort teaming the British maker with Williams Advanced Engineering, as well as China’s LeEco. The latter, a Chinese conglomerate that made a fortune in consumer electronics for entrepreneur Jia Yueting, has been running into financial trouble of late.

LeEco had been hoping to bring two different batter-car brands to market: one sharing its own name and the other the California-based Faraday Future. But LeEco’s financial crunch forced it to scale back investments and Faraday’s planned 2018 launch – along with the $1.3 billion factory it started building in Nevada – have been shifted into neutral.

LeEco also appears to have walked away from the Aston tie-up. As a result, “We’ve decided to make this car rare, which will obviously tend to push the price higher,” Palmer told Reuters. “Aston Martin now plans to proceed independently, funding further development of RapidE by ourselves.” 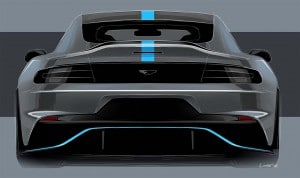 Another rendering shows the rear of the upcoming Aston Martin RapdiE battery-car.

Aston’s decision to keep moving forward, albeit more modestly, fits with the aggressive product strategy that Palmer has put in place since taking the helm of the then financial struggling automaker. Under his guidance, Aston Martin has laid out a broad product strategy that includes not only its conventional mix of sports cars but also the RapidE EV and the brand’s first-ever SUV, the DBX. Palmer has hinted in interviews with TheDetroitBureau.com that the DBX could be next to get an all-electric drivetrain option, a likelihood sources now confirm.

When the former Nissan product chief took over Aston such far-reaching aspirations would have seemed unlikely – some skeptics comparing Palmer’s plans to the now-abandoned strategy laid out earlier in the decade by troubled Lotus. But Palmer has driven a new level of financial discipline, and encouraged a wealth of new investment money that is helping turn his vision into reality.

“RapidE will showcase Aston Martin’s vision, desire and capability to successfully embrace radical change, delivering a new breed of car that stays true to our ethos and delights our customers,” Palmer said in a statement accompanying the renderings of the new RapidE. He separately confirmed the  project will help it prepare for an electrified DBX.

(Daimler charging up EV program with 10 models to come. Click Here for more.)