WM Motor's Weltmeister is the first of many. 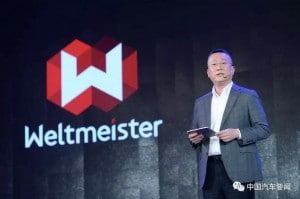 The electric vehicle market in China is quickly becoming highly competitive and this is before Tesla has been given the all clear from the government to build vehicles there without a local partner.

The competition got a little stiffer today as new player in the market to borrow a phrase, announced its presence with authority: WM Motor’s Weltmeister.

Borrowing the German phrase, “world’s best” or “world champion” the new company showed off its new electric sport-utility vehicle at an event in Shanghai that also unveiled the logo for the company.

The name of the new vehicle almost acts as a warning to traditional automakers from the new startup maker and others like it, according to the company’s founder Freeman Shen. Since the government’s recent push to expand the production and sale of NEVs, or new energy vehicles, traditional and start-ups have been scrambling to stake out a new space.

(Tesla readies to deliver Model 3 as truck orders roll in. For the story, Click Here.)

Early it was expected that Tesla would benefit immensely from the new rule allowing non-Chinese EV makers to build vehicles in the country without an indigenous partner. And while Tesla is hustling to get its production ducks in a row in China, so too are other start up makers like WM Motor.

In the meantime, Tesla can import its vehicles into China from its plant in California, but each of those vehicles comes with a 25% import duty, raising the price significantly. Tesla’s “mainstream” vehicle, the Model 3, comes with a base price of $35,000 before the duty.

(Click Here for details about Ford’s plan to build EVs in Mexico.)

WM Motor’s splashy show put it at the forefront of local EV start ups, but it’s not the company looking to get its vehicles on the road in the EV-friendly climate established by the government. Others, according to Reuters, on the move include: Future Mobility Corp Ltd with its Byton brand, Singulato Motors and Nio.

According to Reuters, Nio plans to start delivering its first “volume car,” an all-electric sport-utility vehicle called the Nio ES8, to buyers by June next year.

Future Mobility expects to deliver its first car, also an SUV, during the fourth quarter of next year. Singulato plans to start delivering its all-electric SUV, dubbed the Singulato iS6, to buyers before the end of 2018, Reuters reported.