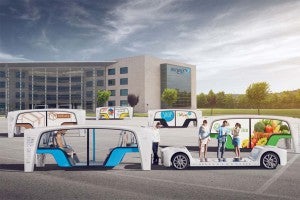 This rendering show the Rinspeed Snap's platform and passenger pod before docking.

Think of it as a sort of motorized Legomobile. Swiss think tank Rinspeed is known for coming up with creative – and sometimes wacky – concept vehicles and the one it plans to bring to the Consumer Electronics Show next month would allow a user to plug different bodies onto a flat, skateboard-like electric vehicle platform.

Rinspeed is by no means the first to adopt an essentially self-contained platform that could be used with a variety of different bodies. General Motors first revealed that concept more than a decade ago in the form of its hydrogen-powered Hy-Wire. And most modern electric vehicles now mount their batteries and other key components in or below the load floor.

But the appropriately named Rinspeed Snap would allow the passenger compartment to separate from its electrified, autonomous platform and be used for other purposes. “(The) pod can even be useful when stationary,” says a release. “it can be anything from a variable shopping pod or a spacious camping pod to a cozy cuddling pod and even provide a breathtaking, fully connected user experience for the occupants of the passenger cabin. The sky is here the limit for the possible applications.” 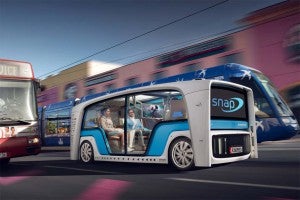 The Rinspeed could be used as a driverless minibus or for other applications.

(Click Here to check out the autonomous Rinspeed Oasis concept.)

Rinspeed has been focusing for years on electrified and autonomous technologies and has been probing the way vehicles might radically change when used in ride-sharing and other mass transit applications. In the case of the new concept, the Swiss firm envisions Level 5 driverless capabilities — the ability to go anywhere at any time under any condition.

The interior of the Snap features a safety cell designed to prevent injuries in a crash – even though one of the goals of autonomous technology is to all but eliminate that risk in the first place.

Inside, meanwhile, the concept vehicle is seen as a technical fantasyland, with three different video screens for each occupant. Credit partners like Harman International for loading it up with enough hardware and software to keep passengers engaged, whether they are working or playing – or cuddling. 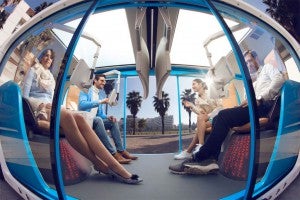 The interior of the Rinspeed Snap would be loaded with an array of screens and other technologies,

Another intriguing feature is what Rinspeed describes as “a ‘personal assistant’ in the form of an autonomous, intelligent robot to accompany the occupants. It will also be happy to help with running errands, carrying purchases, or handle other tedious tasks.”

There’s more technology on the outside of the Rinspeed Snap. One of the potential concerns with autonomous vehicles is that they won’t be able to communicate with pedestrians, bicyclists and other drivers the way humans do: with a nod or a wave of the hand. The Snap attempts to solve this with the use of six exterior projectors. Four, mounted on the sides of the vehicle, communicate with boarding passengers and passersby – and perhaps could be used as signboards while Snap is on the move.

The other two project messages on the windshield and rear glass, such as “Right of way granted,” or “Caution, children.”

We’ll have more on the Snap when it makes its debut at CES next month. It will then make its European debut next March at the Geneva Motor Show.

(Ford patent shows how a driverless vehicle’s pedals and wheel could tuck out of sight. Click Here for more.)