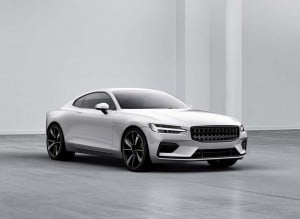 Volvo unveiled its first offering from its Polestar high performance division, the Polestar 1.

Polestar, the performance arm of Swedish automaker Volvo, rolled out its first electrified model during a ceremony in Beijing on Tuesday, the plug-in hybrid Polestar 1.

Originally formed as a race car team, Polestar began producing high-performance versions of Volvo products like C30 and S60 a decade ago. Polestar Performance was purchased by Volvo in 2015 and is now focusing exclusively on sportier models relying on battery-based drivetrains. An all-electric Polestar model targeting the Tesla Model 3 is now in development, the company said.

While Volvo itself now plans to shift exclusively to battery-based drivetrains, “There will be a clear difference between the two brands that add to each other in a very good way,” Thomas Ingenlath, the former head of Volvo design who was named Polestar CEO in June, told the Associated Press.

The Polestar 1 bears a clear resemblance to products wearing the parent Volvo badge, and it makes use of the Scalable Platform Architecture, or SPA, used as the foundation of products like the Volvo XC90 sport-utility vehicle and S90 sedan. But Polestar says about 50% of its underpinnings have been revised. That allows for the use of more batteries and to improve the Polestar 1 performance characteristics. 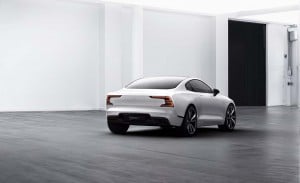 The Polestar 1 made its debut in Beijing and marks the first vehicle from Volvo's electric high performance group.

The sleek coupe adopts a classic GT shape, with a long nose, a sweeping roofline and short overhangs. The body itself is made of super-light carbon fiber.

Under the hood it features a plug-in hybrid drivetrain using lithium-ion batteries to power twin electric motors on the rear axle. That layout will allow for torque vectoring by adjusting power to one or both of the motors when entering a corner.

Polestar did not reveal the size of the battery pack but indicated the 2+2 coupe will deliver 600 horsepower and 738 pound-feet of torque, about 50% more hp than the Volvo brand’s sportiest T8 powertrain used in models like the XC90 and S90. The new model is expected to deliver about 150 km, or 95 miles, per charge. However, that is likely to be reduced by a third using the U.S. EPA test cycle.

To further enhance performance, the new model will be the world’s first, Polestar claims, to use the new Öhlins Continuously Controlled Electronic Suspension, or CESi, advanced chassis technology. 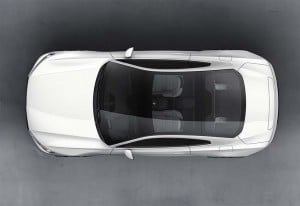 The new Polestar 1 delivers 600 horsepower and 738 foot-pounds of torque.

Polestar plans to launch its first pure battery-electric model in 2019 targeting the Tesla Model 3. Ingenlath would not discuss pricing but the base version of the U.S. maker’s sedan starts around $35,000. Versions of the Model 3 with a larger battery and other options push well above $40,000.

Polestar is also working on an electric SUV, according to Ingenlath.

For its part, parent Volvo this summer announced it would migrate to a fully electrified line-up starting with all new models launched in 2018 and beyond. That will include hybrids, plug-ins and pure battery-electric vehicles, with conventional hybrids making up the bulk of its sales, Rex Kerssemakers now the head of Volvo’s European operations, told TheDetroitBureau.com.

Demand for electrified vehicles has hovered in the 3% range of total new vehicle sales in recent years in key markets like the U.S., Europe and China. The populous Asian nation is now the world’s largest market for battery-based products, and demand is expected to grow sharply as new mandates take effect. The country recently announced rules that would require BEVs and PHEVs to account for at least 20% of total sales by 2025.

But Chinese officials have also indicated they may totally ban sales of new vehicles using internal combustion engines. Norway and India have already announced similar rules, with Germany, France and the UK among other countries considering such a ban. California may follow that move and 11 other U.S. states would likely adopt such a zero-emissions mandate.

Polestar, meanwhile, said it is expecting to adopt a new approach to marketing its new plug-in hybrid. It will offer “subscriptions,” and emphasize online buying, rather than use traditional dealers, at least where legally possible. Customers would pay a monthly fee and they would also be able to rent other Volvo products for a small price.

Volvo itself has announced plans for a similar program, dubbed Volvo Care, with the launch of its compact XC60 SUV.