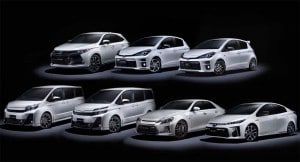 Hoping to pump a little more “passion” into the brand, Toyota is pushing for more extreme designs and, now, adding a series of new performance models.

The Japanese automaker’s Gazoo Racing unit is starting out with seven models in its new GR series, with even the Prius Prime plug-in getting a performance boost. But one model was notably absent during a Tokyo debut: the reborn Toyota Supra that is expected to make its return debut during next month’s Tokyo Motor Show.

The debut of the new line-up comes as President Akio Toyoda continues his push to improve the “passion” quotient for both the Toyota and Lexus brands, the luxury division recently adding the new LC500 sports coupe to its line-up while also adopting a much more aggressive design for the flagship LS sedan. The Toyota brand recently adopted a much more sporty look for its top-selling Camry model.

For those unfamiliar with Gazoo Racing, it has nothing to do with the magical elf that was a familiar character on the Flintstones cartoon series. How it came to be the name of Toyota’s racing team is a bit unclear, but the closest Japanese interpretation is “picture,” or “image,” and it appears that it was meant to imply the image of having the best cars. Toyota then took the concept and adopted the English spelling. 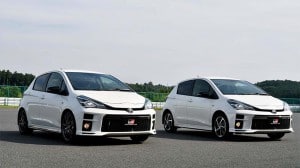 In all, Toyota will offer seven GR models, though only the Yaris GRMN will be sold abroad.

Whatever the origin, Gazoo is now expanding its reach from the race track to public roads with the launch of the GR series. A measure of how seriously Toyota takes things is the fact that the subsidiary has been given not only its own budget but a dedicated team of designers and engineers.

In total, the GR line-up launches with seven different models, including versions of the Yaris – or Vitz, as it is known in Japan – the 86 and the Prius Prime, the plug-in version of the familiar hybrid launched last year.

Mid-range GT models will retain their stock powertrains but get enhancements to chassis and suspension. On the 86 GR, for example, that will include a Torsen limited-slip differential, upgraded brakes and shocks and Recaro seats. But the sports coupe retains its standard 2.0-liter flat-four engine. 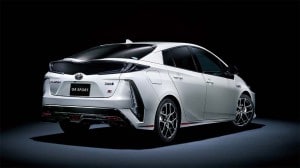 Even the Toyota Prius Prime will get the GR treatment, though it will retain its stock engine.

The Prius Prime GR will similarly come with body, suspension and interior enhancements but retain its stock plug-in hybrid drivetrain.

(Toyota teams up with Intel on “big data” push. Click Here to see why that matters.)

Other models are expected to follow, including GR versions of the regular Prius and smaller Prius C.

Toyota plans to launch an aftermarket line-up of GR performance parts, as well as a chain of GR Garages.

For now, however, the project is primarily focusing on the performance-crazed Japanese Domestic Market, or JDM, though the Yaris GRMN will be offered in Europe. At least for now, says Toyota spokesman Michael Kroll, “None of the GR products are coming to the U.S.”

Could that change? Perhaps we’ll hear more at next month’s Tokyo Motor Show, with the debut of the anxiously awaited Toyota Supra. That model is expected to serve as the flagship of the new GR family, and an ultimate GR edition would seem a perfect fit for North America.

(BMW goes sporty with i3s take on its little battery-electric city car. Click Here to check it out.)