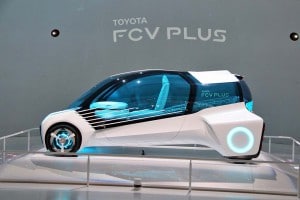 The Toyota FCV Plus cconcept is the sort of futuristic vehicle that will consumer lots of data.

More and more American homes are being wired up for super-high-speed Internet service to handle the demands for gaming, streaming video and home automation devices. But with the age of connected and autonomous vehicles soon expected to become a reality, one of the big challenges will be to create a mobile “big data” ecosystem.

Tomorrow’s cars will need to not only talk to one another but access incredibly detailed, real-time 3D maps constantly updated to show both traffic and disruptions like road work. That could require a flow of information rivaling what goes in and out of a high-tech home, but without the wired data pipeline.

To address the challenges this will create, Toyota is setting up a new consortium with tech giants Intel and Ericsson, Japanese telecomm firm NTT DoCoMo, and auto parts firm Denso. Toyota also says it will leave the new Automotive Edge Computing Consortium open for other “relevant” tech and automotive companies to join.

The announcement comes as just the latest move by auto, technology and telecomm companies to form partnerships aimed at addressing the need to get massive amounts of data in and out of the vehicle, as well as to find ways to create that data in the first place. 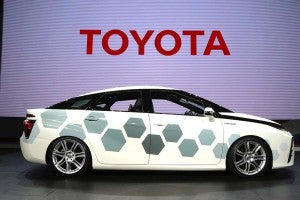 In 2015, for example, Germany’s major automakers, including BMW, Volkswagen Group and Daimler, jointly purchased Nokia’s high-definition mapping operations, HERE. While most of the world’s roads are now digitally recorded, tomorrow’s autonomous vehicles will need to have much higher resolution – and in three dimensions – than the maps currently available for onboard navigation systems. The data will need be accurate enough to allow vehicles to precisely hold their lanes and to know if there are problems ahead, such as a broken-down vehicle or construction.

That means map data, among other things, will have to constantly flow back and forth between the vehicle and the cloud. Meanwhile, connected car systems will keep vehicles in contact with one another and with the highway infrastructure.

Toyota estimates that by 2025, when the era of autonomous cars is expected to just really get underway, the data flowing in and out of vehicles on American reads will top 10 exabytes a month. That is 10 billion gigabytes. That’s about 10,000 times the data flow of today. And that’s just the beginning. A decade later, connected and autonomous vehicles are expected to become the norm, rather than the exception.

(Toyota earnings a mixed bag in latest quarter, but forecast is solid. Click Here for the story.)

Not only will the industry need to figure out how to get that data to and from the vehicle, but what to do with it on the cloud side.

“This expected increase will trigger the need for new architectures of network and computing infrastructure to support distributed resources and topology-aware storage capacity,” Toyota said in a statement.

This is just the latest step Toyota has taken to address the big data era. In January 2016, at the North American International Auto Show in Detroit, the company announced a partnership with Kymeta, a U.S. firm developing a super-fast antenna for vehicle use that could handle the anticipated flow of data. Kymeta, in turn, has formed a new venture with Intelsat and other companies to commercialize its technology.

Until recently, Toyota was reluctant to form partnerships and other alliances, generally preferring to develop technology in-house. That has been changing rapidly. Among other things, the Japanese giant just last week announced a new joint venture with Mazda to develop and produce electric vehicles. The two carmakers plan to swap equity and set up a new, $1.6 billion U.S. assembly plant as part of that partnership.