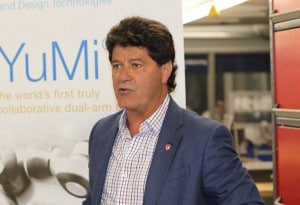 Unifor's Jerry Dias is leading a strike against General Motors at the CAMI plant in Ingersoll, Ontario.

More than 3,000 Canadian autoworkers employed by General Motors at its assembly plant in Ingersoll, Ontario, set up picket lines around the factory after GM and negotiators from Unifor Local 88 failed to reach an agreement on a new labor contract.

The strike is a tough blow for the company as it shuts down production at a plant that builds one of GM’s most popular vehicles, the Chevrolet Equinox. GM is in the midst of ramping up production of Equinox for the 2018 model year and inventories of the new vehicle are in relatively short supply.

Dan Bothwick, president of Unifor Local 88, posted a message on the Local’s website calling for the strike, only moments before the old contract expired at 11:59 p.m. Sunday.

The strike involves a long-running battle between Unifor and GM over the company’s decision to move work, previously done at the CAMI plant in Ingersoll, to a plant in Mexico.

More than 600 workers were idled last month when GM shifted production of a second vehicle, the GMC Terrain, to a GM plant in Mexico where labor cost are cheaper than they are in Canada. 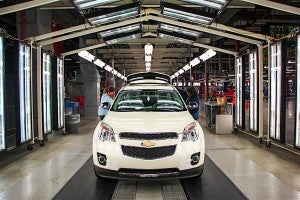 Unifor workers at GM's CAMI plant in Ingersoll, Ontario, walked out on strike.

“We built the Terrain and the Equinox, and they moved the Terrain to Mexico despite being number one in quality and having massive sales, so part of our demands are to [ensure] the Equinox stays in Ingersoll, but General Motors is not interested in that whatsoever,” Unifor Local 88 Chair Mike Van Boekel told the London (Ont.) Free Press after a meeting earlier in the day with union members.

“We’ve gone back and forth on a few different proposals over the course of these few weeks, but quite honestly, we are light years apart from each other in terms of reaching an agreement,” Van Boekel said.

GM said in a statement e-mailed after the strike began that is was disappointed the negotiations had failed to produce a new agreement.

“While General Motors of Canada and our Unifor partners have made very positive progress on several issues over the past weeks, the Company is disappointed that we were not able to complete a new agreement. We encourage Unifor to resume negotiations and to continue working together to secure a competitive agreement.”

The movement of work from Ingersoll to Mexico also has prompted Unifor to put pressure on the Canadian government of Justin Trudeau to demand greater protection for workers in any proposed changes to the North American Free Trade Agreement. Representatives of Mexico, Canada and the United States recently opened discussions on NAFTA at the urging of the Trump Administration.

GM and other automakers, which have invested billions of dollar into Mexico since the recession, have said they prefer the status quo to any major changes to what they view as a successful agreement that has helped protect jobs in all three countries.

(Unifor demands GM restore CAMI jobs — or else. For the story, Click Here.)

However, the fallout from the strike is bound to have an impact on the negotiations around NAFTA, which the Trump administration has threatened to scrap if the talks don’t produce major revisions to the agreement.