Talks with Ingersoll employees down to economic issues.

General Motors faces a strike deadline at a key Canadian plant that builds one of its newest and hottest-selling vehicles.

More than 3,000 members of Unifor Local 88 in Ingersoll, Ontario, are poised to go on strike at 11:59 p.m., Sept. 17. Last month, members of Local 88 overwhelming approved a strike if their negotiators could not reach an agreement with GM.

Workers at the CAMI plant in Ingersoll, which GM once operated as a joint venture with Suzuki, are covered by an agreement that is separate from the agreement that Unifor signed with GM in September 2016.

Negotiators for both sides have said little publicly about the talks. But Local 88’s elected officers said on the union’s website that many of the non-economic issues have been resolved. However, the economic issues are still open, going into the weekend.

(Unifor demands GM restore CAMI jobs — or else. For the story, Click Here.)

The talks have been complicated by GM’s decision to move production of the GMC Terrain from Ingersoll to a plant in Mexico. The shift of Terrain production led to the layoff of roughly 600 workers at the Ingersoll plant. 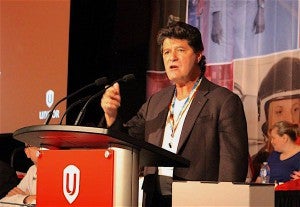 GM expects to call those workers back as production levels of the hot-selling Equinox expand in Ingersoll and other workers opt for retirement under the new agreement when it is finally signed and in place.

However, the shift of jobs to Mexico raised the temperature of what should have been a relatively quiet set of negotiations. Workers in Ingersoll have made no secret of their unhappiness with GM and ripped the company for its decision to move jobs once belonging to Canadians.

“Product is always an important issue in negotiations,” noted one Local 88 officer, who asked not to be identified because he was not authorized to speak with the news media.

In addition, Unifor has been actively campaigning against the North American Free Trade Agreement, which is now in the process of being re-negotiated by representatives of the U.S., Canada and Mexico.

Jerry Dias, president of Unifor, who has been advising the Canadian government of Justin Trudeau on labor-related issues during the NAFTA negotiations, has said that workers deserve far more protection in any new trade agreement covering trade across North America.

(To see why Trump thinks NAFTA talks are bound to fail, Click Here.)

GM, on the other hand, has indicated that it is quite satisfied with the current version of NAFTA and would not like to see any new restrictions placed on auto production in any new agreement.